OnePlus 7 Unboxing And Hands On Video OnePlus launched its latest flagship smartphones, the OnePlus 7 Pro and the OnePlus 7 at multiple events around the world; on the 14th of May. While the former has been made available for sale in most markets and targets a premium price bracket; the latter has just been announced to go on sale starting next week and is more affordable than ever. Here is our experience with the unboxing and hands-on of the latest flagship killer of OnePlus for 2019, the OnePlus 7.
Click here to buy. The design of the OnePlus 7 is reminiscent of its predecessor, the OnePlus 6T. The device measures 157.7 × 74.8 × 8.2 mm and weighs in at 182 grams. It has a robust build with glass on both the front and back which is held together with a metal chassis. The front of the smartphone has negligible bezels on all sides with a waterdrop notch on top of the display. The OnePlus 7 houses the power button along with the mute switch on the right side of the smartphone. The left has the volume rockers along with the SIM card tray. Over at the rear of the device, on the attractive gradient coloured back panel the vertically placed dual rear camera with an LED flash is present. The company branding is placed on the bottom of the rear of the handset. The OnePlus 7 has a 6.41-inch Optic AMOLED display with a resolution of 2340 x 1080 px. The display on the smartphone is the same as its predecessor, with an aspect ratio of 19.5:9. It supports features such as Reading Mode, Night Mode and Video Enhancer. The display on the OnePlus 7 as mentioned above, has a waterdrop notch on top to maximise the screen real estate. It also houses the in display fingerprint scanner which is reported to be 1.5 times faster than the previous generation. One of the key highlighting features of OnePlus 7 is its chipset. The smartphone is kitted with the Snapdragon 855 SoC which is also present on devices including the Galaxy S10 lineup (US Variant) and the Xiaomi Black Shark 2. The chipset is manufactured using a 7 nm fabrication process which makes it highly power efficient in comparison to the 10nm Snapdragon 845 that the OnePlus 6T incorporates. The Snapdragon 855 consists of an Octa-Core Kryo CPU and the Adreno 640 GPU. 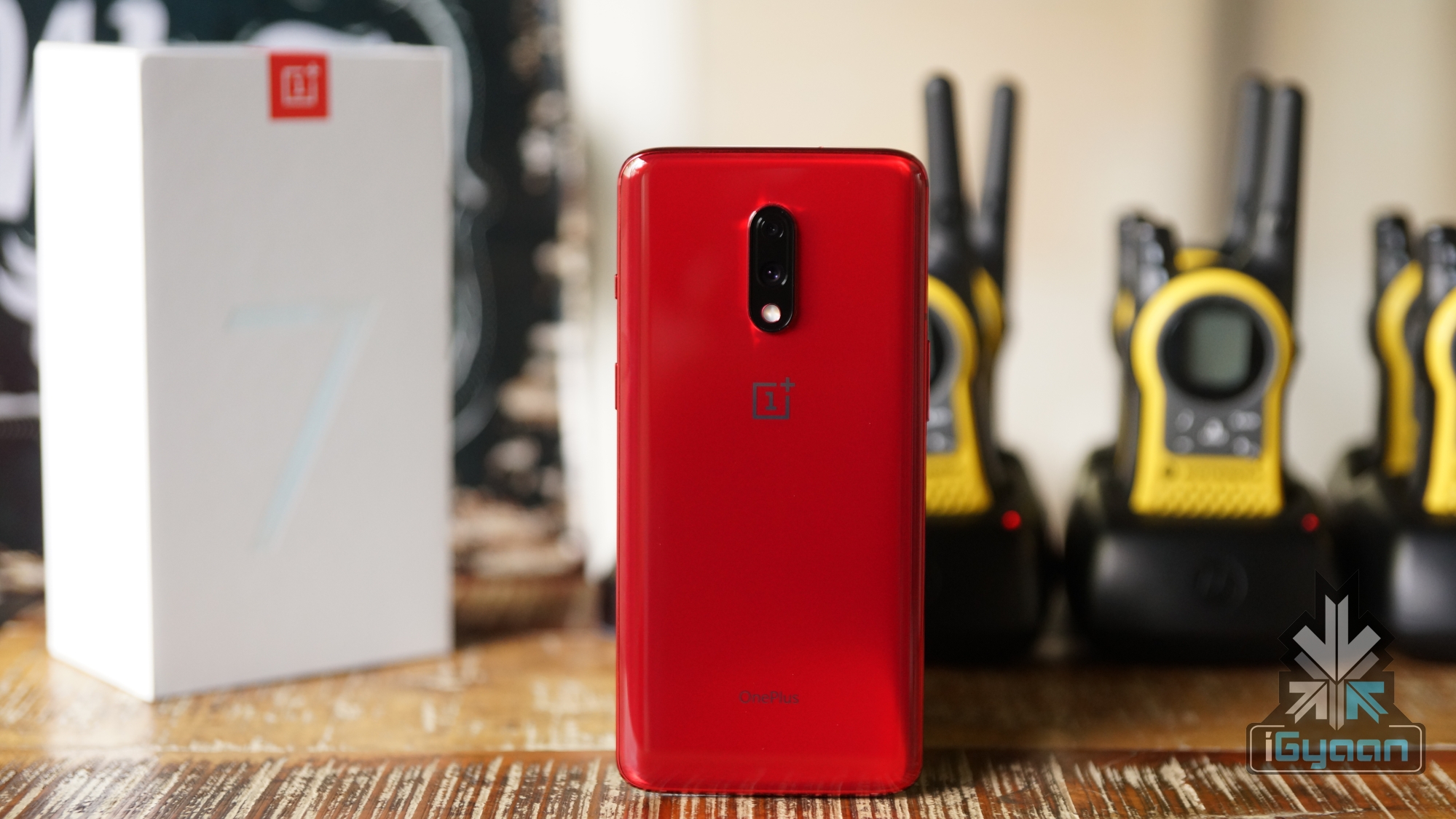 The OnePlus 7 is available in two storage variants, the base model with 6GB of RAM and 128GB internal storage; and the top tier variant with 8GB of RAM and 256GB of onboard memory. It is also one of the world’s first smartphones after the OnePlus 7 Pro to feature UFS 3.0 2 lane storage. This should provide it with class-leading read and write speeds along with the LPDDR4X RAM which should result in fast performance. In terms of video recording, the rear cameras of the device are capable of shooting at 4K resolution at up to 60fps. Video from the front camera is restricted to 1080p resolution at 30fps. Additionally, the camera supports features such as HDR, Portrait Mode and Studio Lighting. The OnePlus 7 is powered by a 3700 mAh non-removable battery which is the same size as its predecessor. For fast top-ups, the battery supports 20W fast charging via the bundled Dash charger inside the box. The device runs on the company’s homegrown OxygenOS which is based on top of the latest Android 9 Pie. Connectivity options on the OnePlus 7 include dual 4G LTE, Wi-Fi 802.11 a/b/g/n/ac, Bluetooth 5.0, NFC, GPS and bottom mounted USB Type C Port. The USB Type C supports the USB 3.0 standard, which should make the read and write speeds on the device faster than before. The OnePlus 7 will available in two colour options at launch namely, Mirror Grey and Red.