Samsung Galaxy A80 With A Fancy Rotating Camera Launched In India

by Sahil KapoorJuly 18, 2019
0
Now Reading
Samsung Galaxy A80 With A Fancy Rotating Camera Launched In India
Browse This Page 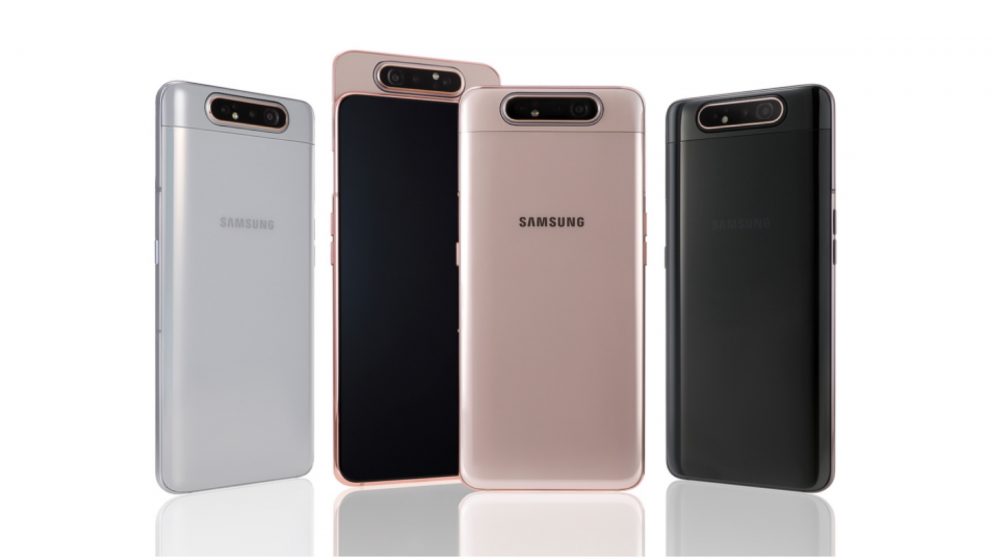 The front of the Galaxy A80 features a massive 6.7 inch Super AMOLED display that is devoid of any notch. Samsung is calling this obstruction-free display as the “New Infinity”. The display panel has a  resolution of  2400 x 1080 px and an aspect ratio of 20:9. For rapidly and securely logging into the UI, the handset features an indisplay fingerprint sensor, which is also present on the Galaxy A70 and the Galaxy A50. Under the hood, the Galaxy A80 features the Snapdragon 730G SoC which is manufactured using 8 nm fabrication process. The chipset consists of an Octa-core CPU along with Adreno 618 GPU. To provide the best both worlds i.e power and efficiency, the eight core CPU is divided into two seprate clusters which are as follows:

For capturing photos and videos, the Galaxy A80 has a rotating triple camera system that consists of an f/2.0 aperture equipped 48MP sensor,  f/2.2 aperture equipped 8MP sensor and a 3D Time of Flight (ToF) along with an LED flash. As previously mentioned the same camera module can be used for photography from both the front and rear. As soon as the user taps the front camera button in the UI, the inbuilt motors come into play which with the help of a complex mechanism makes the camera setup rise and manifest itself for clicking selfies or making video calls. The Galaxy A80 is powered by a 3700 mAh battery which supports 25W fast charging. The device runs on Samsung’s OneUI which is built on top of the latest Android 9 Pie. Connectivity options on the smartphone include Bluetooth 5.0, Wi-Fi 802.11 ac, 4G VoLTE, GPS and USB Type C port for charging and data transfer. The Samsung Galaxy A80 is offered in three colour options which include Angel Gold, Ghost White and Phantom Black. It is offered in a single storage variant for which the price is as follows:

Similar to various other flagship smartphones, the Galaxy A80 also lacks support for memory expansion. It will be available for pre-booking from July 22 to July 31 and will go on sale from 1st of August across all retail stores, e-Shop, Samsung Opera House and all major leading online channels.

To conclude, the Galaxy A80 seems like a fantastic handset which looks appealing and is packed with worthy features. However, we feel the price that it is being offered is a bit steep and will be the only factor that keeps customers away from it. Nevertheless, the unique camera system may be able to justify its price tag and is one features that makes it stand apart from the crowd.

What do you think about the newly launched Galaxy A80? Let us know in the comments below