Samsung has actually reigned supreme in the year 2011, and looks like the year 2012 will be in their hands too. The Omnia W is a representation of what a company like Samsung is capable of. The device is considerably cheaper than its competition but has excellent specs and usability. Here is our review on the Samsung Omnia W ( Wonder). The Omnia W is well built, not the best build you would find in this price range, but definitely well built. The construction is all plastic and appears flimsy, but is actually quite good. The back panel has some shell/metal elements that have a brushed and painted look , to try and give the device a little more elegance than it actually deserves, that part may not have been achieved. Buttons are well raised and fairly easy to use. The front bezel is a hair higher than the glass front, protecting the display from flat falls. Overall the device should do well in day to day usage. 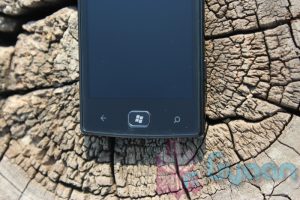 The camera on the Omnia is a 5 mega pixel autofocus camera, with impressive light capture, the camera is one of the best cameras in its class of phone. The autofocus is fast, although you have the ability to tap to focus aswell, images can be clicked almost instantly. Video on the other hand is capped at a 720p HD quality, we often wonder why companies do not design the cameras to deliver 1080p, either way, video capture will require a lot of ambient light and indoor video is poor. The front camera is only good enough for low bit video calling , and should solve the purpose unless your friend on the other side is viewing your video on a big screen TV, if so is the case you will look like a character from Minecraft.

The display is a beautiful Super AMOLED display is a Samsung PenTile display which means that two red subpixels, two green subpixels, and one central blue subpixel is placed in each unit cell of the display. In layman words, its an old technology developed by Samsung back in 1990, and is still used in some of their devices. The display matrix arrangement has often received critique, and is not appreciated well. We however, found that the display was able to reproduce color well and had good deep black levels. The display is excellent for viewing video and and playing games. If you have a thing for the “world wide web”, or a bookworm within, then the display is capable of crisp fonts / texts on the screen for easy viewing. Outdoor visibility is low-poor, due to the inherent problems in AMOLED screens.

With limitations to the kind of files that can be played back on the device, it does not compete with an Android device. Bluetooth is locked and file transfer denied, for most of the things. However, whatever Windows can play natively will work on the phone, and you can always sync up using Zune, or Windows Phone Connector. The speaker is loud enough for music and watching movies. The included earphones are above average, but will not satisfy the bassphile. A capable phone is what the Omnia W turned out to be. The earpiece and mic war loud and clear, and network connectivity was strong. In our standard 3 hour call test the Omnia dropped the call twice exactly at 1 hour 51 mins , both times. No network drop was faced in the overalll testing and we are quite happy with the result.

As we have already stressed enough, the WP7 keyboard is one of the best in the world, we don’t need to say that its really good on the Omnia W. It has predictive text and autocorrect, and it is a super fast keyboard, no complaints. The messaging and email capabilities are good, the OS is connected well to Facebook and Twitter and should serve you well. The internet is a domain which is not properly tapped on the Omnia, with limitations of the browser in terms of javascript and flash. That being said it is one of the fastest internet browsers out there. The screen is great for website browsing and even better to read daily news stories from iGyaan. With a host of apps from the marketplace you can actually find your fix for the web.

Battery life is impressive on the Omnia W with upto 2 days of standby and 5 hours of talk time. The battery fares well while gaming and heavy graphic games can be played for a good 2-3 hours. Music playback should last 10 hours while video lasts about 4-5 hours.

The OS is a different playing field in the world of iOS and Android, as we mentioned in our previous Reviews. The interface is one of the cleanest and snappiest out of the lot, and there is no crashing or lagging from the interface even when multiple tasks are running ( Surprising since Windows is the name attached). The marketplace is also ever-growing with a host of applications and games, the future of Windows Phone looks bright. With no access to file sharing over bluetooth and native file compatibility, the closed system may be a let down for some. Samsung has added Video Calling to the OS to make it a little worthwhile. Samsung also offers multiple apps to make the experience a bit better. The included AllShare will allow for you to stream media to other Samsung Devices. One of the best phones available at the price range, if you are not happy with the Android OS. or the way it looks. Also to consider the OS is as fast and responsive as iOS if not faster. A good smartphone with inbuilt office documentation capabilities and one that supports Microsoft SkyDrive. If you are a true windows junkie, the interconnectivity will impress, the lack of script execution may limit the experience. But overall the phone is a complete mix of Phone, Smartphone and PMP.