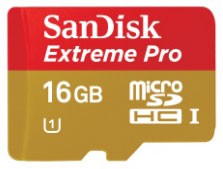 SanDisk claims this is the world's fastest Micro SD card

SanDisk launched what it claims to be the world’s fastest Micro SD card, the Extreme Pro microSDHC line of storage add-ons for your smartphone or tablet. It has advertised speeds of 95MB/s read and 90MB/s write. The card is expected to be available by the third quarter of 2012 and in 8GB and 16GB capacities. The 8GB model will be priced at Rs. 2,599 while the 16GB model will be available for Rs. 4,699.

Loads apps faster, transfers files quicker and improves overall system responsiveness with up to 95MB/sec read and up to 90MB/sec write speeds1

Mobile phones will capture 525 billion images in 2012 and nearly one third of all video footage in 2014, according to IDC

·Full HD Video Capture: Mobile phones will capture approximately one third of all video footage by 2014, according to IDC3. With a UHS Speed Class 1 rating (Class 10 equivalent), the new card allows consumers to record superior Full HD videos, even in 3D

·High-Quality Photo Capture: Mobile phones will capture 525 billion photos in 2012, roughly half of all photos captured this year, according to IDC4. The card is ideal for mobile imaging applications, offering up to 90MB/sec write speed for capturing multiple photos using burst mode with a UHS-I enabled mobile device

·Faster File Transfers: With up to 95 megabyte per second (MB/sec) read speed, the card moves files quickly between host devices

Availability and Pricing
The SanDisk Extreme Pro microSDHC UHS-I card is available on www.sandisk.com in 8 gigabyte (GB)5 and 16GB capacities carrying MSRPs of $59.99 and $99.99. The card is compatible with any microSDHC-slotted device and is ideal for UHS-enabled smartphones and tablets.

MILPITAS, Calif., June 19, 2012-SanDisk Corporation (NASDAQ: SNDK), a global leader in flash memory storage solutions, today announced a suite of USB flash drives that includes SanDisk’s fastest, thinnest and highest-capacity USB products ever. The drives offer consumers the storage they need to carry libraries of digital content with them wherever they go, transfer their files quickly and do so with style.

“Whether consumers are seeking super-fast transfer speeds, maximum storage capacity or a stylish fashion statement, we offer a drive to meet their needs,” said Bob O’Keefe, vice president, retail marketing, SanDisk. “SanDisk pioneered the USB drive and now offers one of the broadest lineups in the industry, with a wide range of form factors and reliability that consumers can count on to store their important files.”

The drive dramatically reduces wait times for consumers. It can transfer smaller files almost instantaneously and larger files such as a 3GB file in 20 seconds or a 40GB file in four minutes3. The SanDisk Extreme USB flash drive is backed by a lifetime limited warranty4 and available worldwide now in 16GB to 64GB capacities carrying MSRPs of $64.99 to $159.99.

Cruzer® Glide™ USB Flash Drive
The 128GB Cruzer® Glide™ USB flash drive is SanDisk’s highest-capacity USB drive ever, and features reliable, secure and portable storage for photos, videos, music and other files. The drive is an ideal companion for anyone using ultra-thin notebooks, which are often limited to 128GB of storage. In such a configuration, the Cruzer Glide USB allows consumers to double their available storage with a convenient portable solution.

Cruzer® Facet™ USB Flash Drive
For users whose style is reflected in everything they do, the Cruzer® Facet™ USB flash drive is a durable drive with stainless-steel casing designed with a variety of rich vibrant colors and a faceted texture. The Cruzer Facet drive combines function and personality, making it a fashionable way to store digital files.

This new drive is SanDisk’s thinnest and is available worldwide now in 8GB to 32GB capacities carrying MSRPs of $32.99 to $84.99.

Available Software
Virtually every SanDisk USB drive and all drives in the new suite include secure file encryption and password protection. SanDisk® SecureAccess™ software provides 128-bit AES file encryption and password protection6 for private files while leaving the rest of the drive available for worry-free sharing. For added protection and convenience, two GB of secure online storage7 is offered for easy file backup and access from any web browser.

SanDisk also offers downloadable Cloud Catcher software, which allows users to backup and organize personal data from some of their favorite social media and online sites, hassle free on a SanDisk USB drive.

Shivaank Rana
iGyaan's Carlos Santana! Shivaank loves Apple products! He stays up to date with the latest happenings of the tech world and gets his hands dirty with the latest Gadgets! Follow Him on Google Plus : Google+
You Might Also Like
LatestMultimedia and Storage
Read More