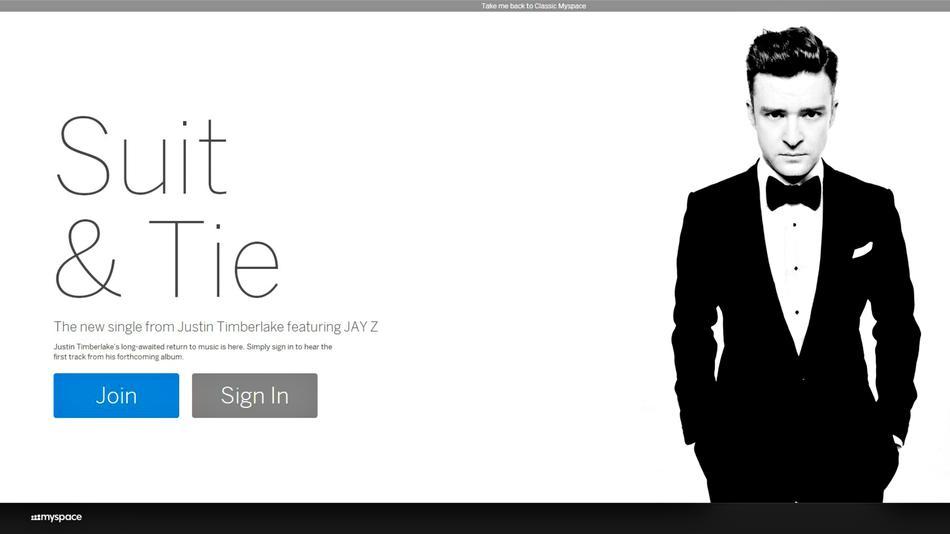 New Myspace — with its drastically different redesign — has left invite-only mode, opening up the revamped social network to the public.

The landing page for New.Myspace.com shows a dapper Justin Timberlake and promotes his new “Suit and Tie” single that he released late Sunday night.

Timberlake, who took an ownership stake in the company in 2011, had given the world a sneak peek of New Myspace in September, but now anyone can use the refurbished network.

The tie-in with Justin Timberlake’s new single is bound to drive considerable traffic back to MySpace. Whether or not these new users will hang around after they’ve heard the track is anyone’s guess, but MySpace’s new interface and fresh design might prove to be a refreshing change from the dull blue hues of Facebook and it’s spam ridden newsfeed.

Facebook is a social network first and foremost, with music discovery bolted on the side and pushed into the newsfeed, thanks mainly to Spotify. The new MySpace, on the other hand, puts the theme of music discovery front and centre. With social networking features used more as tools for artists to contribute to the network, rather than for general users to post status updates and pictures of cats.

It’s quite clear to see that MySpace is sticking with music as the focus of their service. The new design offers greater potential for artists to promote themselves and interact with their online audience, compared to plain Facebook pages and text-centric Twitter feeds.

The site ranked as the 46th most-visited Web property in a report released by analysis firm comScore in December, down from 43rd in a list released in August.

According to the report, the site logged 27 million unique visits in November 2012, behind Facebook’s 148 million, Twitter’s 39.5 million and Tumblr’s 29.7 million. It did, however, beat out Pinterest, which was ranked 50th with around 26 million unique visitors.

likethis
What's your reaction?
Awesome
0%
Epic
0%
Like
0%
I Want This
0%
Meh
0%
Posted In
Latest, Social Media
Tags
About The Author