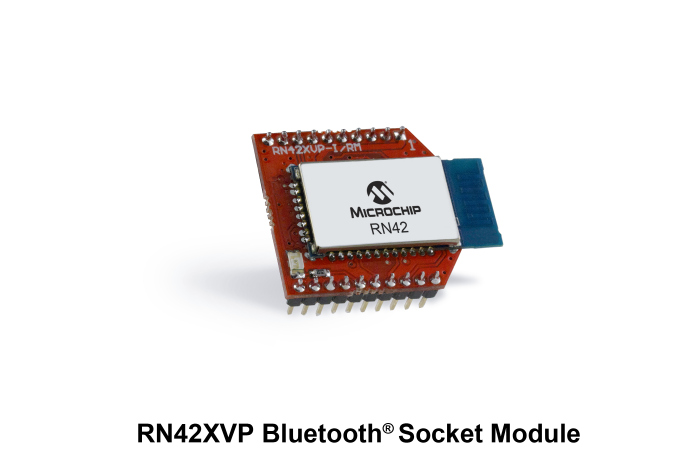 Microchip is also adding a low-power 2.4 GHz radio that supports – for the first time in one chip – both the IEEE 802.15.4 and proprietary data rates (from 125 kbps to 2 Mbps), including the ZigBee, MiWi and other proprietary protocols.

This is also Microchip’s first radio that can support both the IEEE 802.15.4 and proprietary data rates (from 125 kbps to 2 Mbps), including the ZigBee, MiWi and other proprietary protocols.Some designers want an easy way to migrate their 802.15.4 designs to either Wi-Fi or Bluetooth, in order to make them accessible from smart phones and tablets, or to add internet connectivity.

This includes applications such as wireless sensor networks, remote monitoring/control and measurement, and M2M cable replacements for home, commercial and industrial networks. The RN XV series of Wi-Fi and Bluetooth socket modules provide agency-certified, drop-in connectivity for any XBee socket.

To simplify designs, the stacks are integrated on the module, configured via simple ASCII commands, and can easily connect to any MCU via a serial interface. Other designers want to add more extensible Wi-Fi functionality, such as a complete Web server and email, via a configurable source-code TCP/IP stack that is resident on one of many PIC microcontrollers.

The new low-power and agency-certified MRF24WG0MA/MB modules connect at all IEEE 802.11b/g data rates, up to 54 Mbps, and are Microchip’s first to support a sustained throughput of 5 Mbps. This provides a footprint-compatible migration path for users of Microchip’s existing Wi-Fi modules who need greater speed or increased access-point compatibility, along with more features.

Bluetooth digital audio is rapidly expanding in high-volume applications such as accessories for smart phones and tablets, as well as audio sound bars. To meet this demand, designers need a cost-effective development platform that provides high-quality audio. Microchip’s 32-bit PIC32 microcontrollers provide a high-performance platform for developing quality digital-audio playback and accessories. The new PIC32 Bluetooth Audio Development Kit builds on Microchip’s existing stack-integrated Bluetooth audio module with a new low-cost, agency-certified Bluetooth HCI transceiver module based on a standard radio, AVRCP and A2DP Bluetooth profiles tailored for the PIC32, as well as both standard and advanced audio CODECs such as SBC, AAC and MP3.

Additionally, this kit can be used with Microchip’s existing Made for iPod and Android stacks. Together, these elements provide a versatile and powerful development platform with a high level of customisation and flexibility.

Shivaank Rana
iGyaan's Carlos Santana! Shivaank loves Apple products! He stays up to date with the latest happenings of the tech world and gets his hands dirty with the latest Gadgets! Follow Him on Google Plus : Google+
You Might Also Like
Hardware NewsLatest
Read More