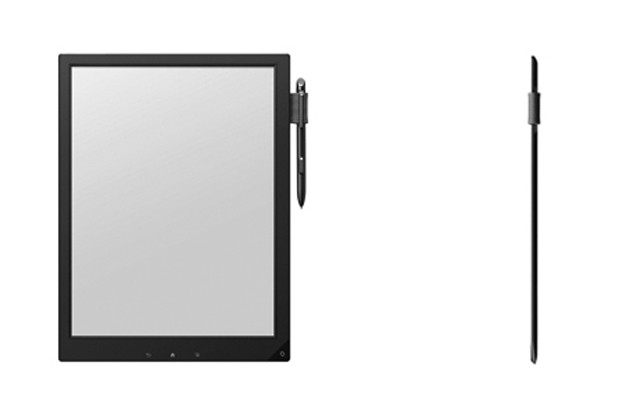 Sony has just shown off a new prototype the E-paper Slate, which combines as the name suggests an E-Ink display and a Stylus to bring about digital classrooms. Packed with a 13.3-inch screen (1,200 x 1,600px) with an electromagnetic induction touchscreen for accessing menus and scrolling using a Stylus.

The device currently only supports a few file formats including PDF and is sized up at only 6.8mm thick with a light weight of 385 gms.

The Slate is also equipped with onboard storage of 4GB and an expansion slot that can enable increase in capacity for the student. If the need arises. The Battery life is also supposed to be marvelous with over 3 weeks of usage, incase of wireless networks being off. The Software updates will be pushed OTA thanks to Wifi connectivity along with the ability to pass along notes wirelessly.

The prototype is functional to the extent that the company will begin summer 2013 tests, for late 2013 availability for the the E-Paper Slate, In Japan atleast.

likethis
What's your reaction?
Awesome
0%
Epic
0%
Like
0%
I Want This
0%
Meh
0%
Posted In
Latest, Sony
Tags
e-ink, eink
e-ink, eink
About The Author