We just checked our inbox and a tipster just sent us a few pictures of the upcoming Micromax A111 Canvas Doodle. This is Micromax’s revision to the A110 Canvas2 and will feature interesting specs to boot. A 5.2 inch multitouch capacitive screen, along with a Quadcore Mediatek 1.2 GHz processor.

The Micromax A111 Canvas Doodle will also have 4 GB of inbuilt storage and 512 MB of RAM (seems like a misprint)  according to images. The Main camera is an 8 MP autofocus camera and the secondary camera is a 2.1 MP snapper, Both should be capable of HD Video. The main display is a 5.3 inch Hypersensitive display which is expected to be at least 1280 x 720p in terms of resolution.

If the images are carefully examined this looks like Micromax’s take on the Galaxy S4 with the UI quite identical to that seen on Samsung’s new flagship. The MRP. of the product has been set at Rs. 16,999 but should be available for under Rs. 15,000 when it is launched. 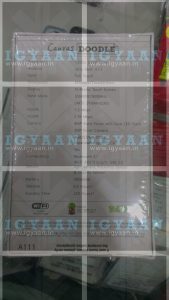 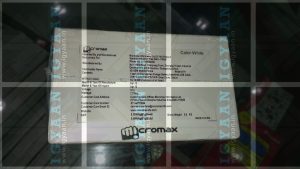 At just under 10mm the phone is fairly slim and according to rumors should feature a hypersensitive display capable of stylus input, hence the name “Doodle”. As per the packaging Evernote and Skitch are also preloaded on the smartphone for out of the box functionality

Micromax has enjoyed a huge amount of success with their Canvas Series and this device by the looks of it will add to that success. Stay tuned for more updates!

likethis
What's your reaction?
Awesome
0%
Epic
0%
Like
0%
I Want This
0%
Meh
0%
Posted In
Latest, Micromax
Tags
igyaan
igyaan
About The Author

Bharat Nagpal
Founder and Chief Editor of iGyaan. Bharat likes to keep on top of technology ! Follow Him on Google Plus : Google+
You Might Also Like
LatestMicromax
Read More