At just 102mm long and 61mm wide, the LG Optimus L3 II Dual is a really snug fit for anybody’s hand. It is made up entirely of plastic and has a glossy black finish both at the front and the back, which we feel makes it very scratch and smudge prone. The overall design of the phone is really well, bland, to be honest. It has rounded corners, and a grey bezel runs around the phone. Under the 3.2-inch display there are 4 touch capacitive buttons, namely back, home, menu and a SIM switch button. At the top you have your power button along with a headphone jack, a microphone and Micro-USB port at the bottom, and your volume rocker towards the left. Build quality though is solid, but the lack of thought put into the design leaves us slightly disappointed.

LG Optimus L3 II Dual is a dual-SIM smartphone that comes with 3.2-inch QVGA IPS display. It houses a 1,540mAh battery. It is powered by a 1GHz single core processor with 512MB of RAM, 4GB of internal storage and a 3-megapixel camera.

The device runs on Android 4.1.2 (Jelly Bean) out of the box and connectivity options include 3G, Wi-Fi 802.11b/g/n, Bluetooth and aGPS. There is a 3-megapixel rear fixed focus camera on the smartphone.

LG Optimus L3 II Dual has a 3.2-inch screen that has a resolution of 240×320 pixels. Thus, the screen has a low, 125 ppi pixel density, which leads to unclear text and obvious difficulty while browsing. The screen has a high contrast and decent brightness though. As it is an IPS display, the viewing angles are pretty good and outdoor visibility is one of the best in this segment.

Now we obviously wouldn’t expect a stellar screen from a device of this segment, but we did expect better in terms of the pixel count. Video experience on the device is hampered by the screen size and resolution, and so is gaming. So if these are your major criteria while choosing a phone, we suggest you give this one a miss.

Audio on the LG Optimus L3 II Dual is nice and loud. We were really satisfied with the quality of the sound.

The phone can connect to the internet, using 2G, 3G or Wi-Fi, with a maximum download speed of 3.6 Mbps on 3G. The web browsing capability on the LG Optimus L3 II Dual is dire, yes, dire. Pages take loads of time to load up, pinch to zoom is very choppy and laggy as well and it isn’t the best in this segment and also, the low-res screen makes it difficult to read online content.

The LG Optimus L3 II Dual comes loaded with Android  4.1.2 (Jelly Bean) along with, as expected, LG’s Optimus 3.0 UI. Apps like Gallery and Music have been given a makeover by LG, and we were happy that LG  paid attention to such small details when it came to the software on the phone. It gets the same lock screen transition and other animations that some of it bigger siblings get.

You have 5 lock screens along with various themes to choose from. The drop down windows has a set of toggles on the top, which can be customised and adjusted according to your needs. The lock screen too can be customised by using various shortcuts and clock/calender widgets. 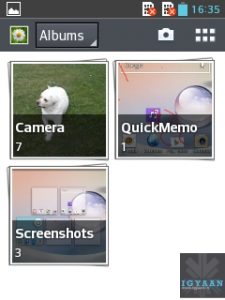 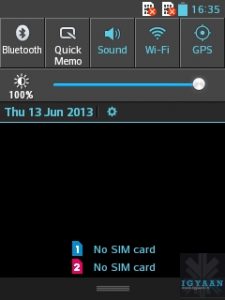 The LG Optimus L3 II also comes pre-loaded with some of LG’s custom applications like the QuickMemo app that lets users scribble notes on a blank page or on top of a screen shot. Others include ones for Backup, Cell Broadcast, File Manager, a Memo app, Polaris Viewer, LG’s service related apps, SmartWorld, and a Task Manager.

Safe to say, this phone has one of the best software detailing in this segment. Well done LG. The LG Optimus L3 II Dual comes with a 3.2 megapixel fixed focus camera without flash which in our opinion is a bit substandard and the image quality is average at best.  Even with such a low quality camera, you have 3 shooting modes to choose from- Portrait, Landscape, Sports, Sunset and Night modes, along with settings for ISO, White Balance, Colour effects, and exposure. 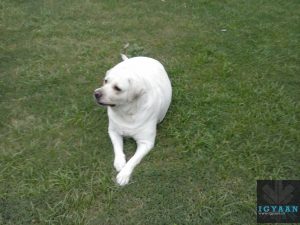 Pictures were hazy, and grainy. In low-light conditions, images are barely visible. Likewise, videos can be recorded as QVGA videos. Not good enough by any means.

The dialer is nice and easy and like any other android phone cleverly integrates contacts and groups.

Call clarity was decent throughout our use, with neither us nor those on the other end of the line having any issues being heard. We had no dropped calls either.  The phone is a dual-SIM GSM phone with support for one active and the other in standby mode.

We’re not sure what LG was aiming for with the LG Optimus L3 II Dual. It lacks a USP. The only impressive feature of this device, and a big one that too, is the attention paid to the software aspect of this device. The custom apps, handwriting recognition etc. puts this device head and shoulders above the competition in this segment as far as software is concerned. In contrast to that, the hardware of the phone is powered by seems dated and below this price point. Phones like the Micromax Canvas A110 offer way better specs at just a few 100 rupees more.

likethis
What's your reaction?
Awesome
0%
Epic
0%
Like
0%
I Want This
0%
Meh
0%
Posted In
Latest, LG
Tags
GAMING, price
GAMING, price
About The Author