Just like the rest of the Galaxy series, the Samsung Galaxy Mega 6.3 is a plastic-bodied phone with the same Galaxy S4-like template design. It has the same metallic edging, the silver-edged home button and shiny speaker grille. The back panel shares the same black and silver crosshatch pattern. The Galaxy Mega 6.3 is absolutely huge. At 88mm wide and almost 198mm tall, this is the biggest smartphone we’ve ever reviewed. It weighs almost 200g, but it doesn’t feel overly heavy in the hand considering its size. 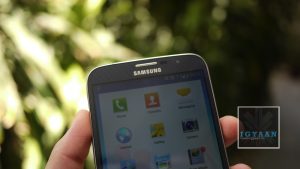 Moving around the device, there’s a microUSB charging port on the bottom, a volume rocker on the left-hand side, a power button on the right-hand side and a 3.5mm headphone jack up top. There’s a microSD card slot for adding additional storage under the flimsy battery cover. Overall build quality is like any other Samsung device, but the mammoth screen size raises a few questions over the durability of the Samsung Galaxy Mega 6.3.

The USP of the Samsung Galaxy Mega 6.3 is its display. While the sheer size of the display is impressive itself, we were also pleased with the colour reproduction. Samsung opted for a Super Clear LCD display instead of their AMOLED panel, and this makes it one of the better Samsung devices to use outdoors. The thing that disappointed us though was the resolution of the display. At a time when companies are coming out with 5.5″+ Full HD displays on devices, and Samsung too will release the Note 3 with one, the 720×1280 resolution is a let down. A device of this size will by default be used for a lot of media consumption which involves a lot of text as well, so a 233 ppi pixel density is inadequate in our opinion.

The sheer size of the screen on the Samsung Galaxy Mega 6.3 though makes consuming media enjoyable and almost stress free, and the chipset is more than capable of handling HD video playback and streaming.

When it comes to general performance though, the Samsung Galaxy Mega 6.3 left us disappointed. The phablet lags while performing even the simplest of tasks sometimes, like scrolling through your apps grid. Samsung could have gone with a quad-core chipset on the Samsung Galaxy Mega 6.3 given the fact that it is priced above the Rs. 30,000 price mark, but instead it chose to extend its profits margin by using a dual-core chipset.

We’re forced to believe this is poor optimization in TouchWiz more so than the capabilities of the chip though, as other Snapdragon 400 devices manage to perform smoothly, and the Snapdragon 600-powered Galaxy S 4 was also laggy until an update just before launch.

The speakerphone on the Samsung Galaxy Mega 6.3 is fantastic, it is really loud, but not in a painfully distorted way, it sounds good through videos, music and even games.

The Samsung Galaxy Mega 6.3 has an 8-megapixel rear-facing camera and a front-facing 1.9-megapixel camera for video calls. The camera app is almost identical to the one used on the Galaxy S4 and we particularly like the excellent scrolling carousel to change camera modes. Video is captured at Full HD and employs anti-shake if you need it from the main UI, the front camera however- captures 720p video. You can also add some effects to your pictures in the Auto Mode. Shooting modes like “Best Photo”, “Best Face” and “Sound and Shot” worked really well on the S4, and they work just as great on the Galaxy Mega 5.8 .

Images are processed to give a punchy, high-contrast look that is high on impact, if not quite as great at producing an entirely natural look.

The Samsung Galaxy Mega 6.3 runs Android 4.2 Jelly Bean, with the usual Samsung TouchWiz interface laid on top. Consequently, it looks and feels almost identical to the other high-end Galaxy phones, including the Galaxy S4.

The old elements of the TouchWiz UI are intact too, with features like Direct call (lift the phone from within a message to call), Smart Alert, tilting to zoom into pictures or gallery. Pan device to move the Icons or browse a zoomed in Image and even Flipping the device to Mute or pause.

One might think that such an enormous screen, coupled with a big flat form, would mean that the Samsung Galaxy Mega 6.3 battery life suffers. In fact, the very opposite it true. You can easily get a day and a half of moderate to heavy use out of this phone before it packs up. Given that there’s only two cores and that it’s not a 1080p screen, the quite large 3,200mAh actually goes a very long way, and that’s no small shakes if you’re looking at the Mega as both your tablet and phone.

One area the Galaxy Mega 6.3 shines is call quality. The rear speaker for speakerphone and the earpiece speaker are both quite loud, and they provide crisp, clear audio.

However, putting a phone as large as the Galaxy Mega against your head looks and feels odd. You may get used to it, but passers-by won’t any time soon.

The Galaxy Mega’s name definitely refers to its size rather than specifications. The Galaxy Mega 6.3 is only slightly cheaper than the Galaxy S4, while having a less advanced screen, a much less powerful processor, less RAM, a worse camera and – worst of all – diminished usability.

The Galaxy Mega 6.3 is a phone that might as well be the next big thing, but, the problem here may be that its just too big to be an everyday phone.

Shivaank Rana
iGyaan's Carlos Santana! Shivaank loves Apple products! He stays up to date with the latest happenings of the tech world and gets his hands dirty with the latest Gadgets! Follow Him on Google Plus : Google+
You Might Also Like
AndroidLatestReviewSamsung
Read More