LG Electronics today officially announced the LG G Flex, a smartphone which is curved and is said to to follow the contour of the face, it is the first device to offer such a design in the smartphone market claims LG.

The LG G Flex is the best representation yet of how a smartphone should be curved,” said Dr. Jong-seok Park, president and CEO of LG Electronics Mobile Communications Company. “The LG G Flex with its distinctive design, innovative hardware and consumer-centric UX represents the most significant development in the smartphone space since smartphone became part of our regular vocabulary.”

How can the curved display help ? here is what the company says: the vertically curved design of the LG G Flex reduces the distance between one’s mouth to the microphone when the device is held against the ear, as traditional telephone handsets used to. The LG G Flex employs a curvature arc that is optimized for the average face, to deliver improved voice and sound quality.That is not all, the company is offering the same back buttons that we saw it on its latest flagship the LG G2.

– QTheater gives users quick access to photos, videos and YouTube right from the lock screen. By touching the screen and dragging outward along the curved surface with both fingers, the apps appear with the effect of theater curtains being drawn.

– Swing Lockscreen alters the image on the lockscreen depending on how the G Flex is held.

– Face Detection Indicator displays the LED on the Rear Key in green to confirm status of face detection and focus.

– Camera Timer flashes the Rear Key LED to indicate that the countdown has begun.

– Urgent Call Alert flashes the LED on the Rear Key in red when several consecutive calls from the same person go unanswered. Alright, so LG has added a new feature to the G Flex, the phone has a “Self Healing” coating on the back cover which is a elastic coating to which the company claims will help the back to recover from the usage scratches and nicks which will help the device to look new every time. This is something new indeed, but we cannot comment on it without our hands on with the device. The device will be available in Korea in November no word for availability in other countries. 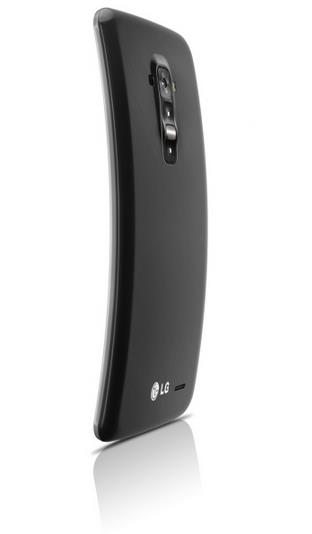