Samsung Galaxy S5 is Packed With Many Features: Here is Everything You Want To Know

by Preetish GumberFebruary 25, 2014
17
Now Reading
Samsung Galaxy S5 is Packed With Many Features: Here is Everything You Want To Know
Browse This Page Samsung has officially unveiled  the Galaxy S5. As suggested by the trailer released sometime back, the Galaxy S5 brings in alot of new features. After the success of the Galaxy S4, Samsung is now ready to make more customers after selling more than 200 Million S devices.

Lets talk about whats new; When it is about Samsung, folks usually do not expect more, specially when it is about the looks. Keeping up to it the Galaxy S5 shares the same look as any other Galaxy device, however, with some enhancements. The Galaxy S5 has a leather like dotted back which is in any case better than the usual plastic on old devices. This new back design is not like what we have seen on the Note 3 and other recent devices, check out the image below: Moving further in, the Galaxy S5 is launched with some unexpected features as well. To start with, the Galaxy S5 is IP67 Dust and water Resistant, which means; it can be used in rain, while swimming etc, but keeping in mind it is not water proof. The Galaxy S5 also features a hear rate sensor, located just below the back camera and aside to the flash light. It also offers a Finger Scanner, providing a secure, biometric screen locking feature and a seamless and safe mobile payment experience to the users.

With the Galaxy S5, Samsung is going back to basics to focus on delivering the capabilities that matter most to our consumers,” said JK Shin, President and Head of IT & Mobile Communications Division at Samsung. “Consumers are looking for mobile tools that inspire and support them as they improve their everyday lives. The Galaxy S5 represents an iconic design with essential and useful features to focus on delivering the ultimate smartphone on the market today through people inspired innovation.” The device has alot more features inside, but lets talk about the specifications first. The Samsung Galaxy S5 sports a 5.1 Full HD Super AMOLED display with a resolution of 1920 x 1080 pixels. The Galaxy S5 is powered by a 2.5 GHz Quad-Core CPU, Snapdragon 800 chipset and Adreno 330 GPU. Lets get back to the remaining features; S Health 3.0, the new Galaxy S5 offers more tools to help users stay fit and well. It provides a personal fitness tracker to help users monitor and manage their behavior, along with additional tools including a pedometer, diet and exercise records, and a new, built-in heart rate monitor. The new S Health app can sync with Samsung’s Gear line of wearables, including the Gear Fit fitness band, Gear 2 and Gear 2 Neo, and it offers guided coaching and feedback while you work out.

Samsung has not shared any price information, but you can expect it to be as high as the number of new features added in this new Galaxy. We will bring you more information and our hands-on real quick. Stay Tuned! 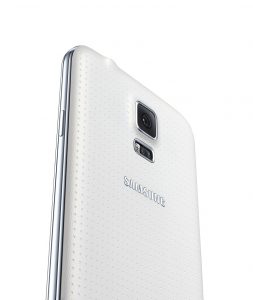 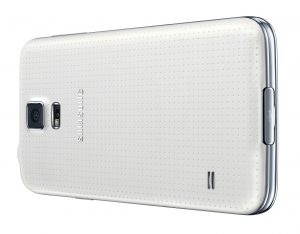 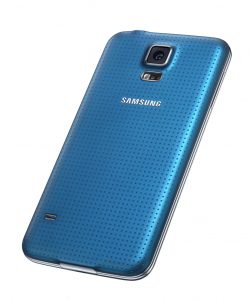