Spice has launched a new Android Smartphone, the MI-310 running Android 2.2 Froyo to compete in the mid-range mobile market. Read the review for more details. The MI-310 has a stylish aluminium body which gives easy access to the battery and internally fitted Micro SD card.  The Power/Unlock button on the top of the phone is flush with the bezel which may cause some difficulty while unlocking the device. It has a 320×480 pixel, 3.15 inch capacitive touch screen display which displays vivid images and videos and there are no complaints there. The phone also comes with a stand-alone camera shutter button, volume buttons and a small touch-sensitive trackpad for easier scrolling.

The overall construction of the phone feels quite sturdy and its quite comfortable to hold and use. It has an inbuilt memory of 85 mb with a Micro SD slot expandable to 16Gb, built in GPS with AGPS support, 3G compliance with HSDPA access (7.2 mbps), bluetooth 2.0, WiFi 802.11 b/g, a 2.0 MP camera with digital zoom and video recording and an internal FM radio. As far as sensors go the phone has a built in proximity sensor and accelerometer. While in a call, the proximity sensor sometimes fails and causes your cheeks to start pushing buttons on-screen, which can get quite frustrating. (A factory reset of the device however fixed this problem for us) The 320x480px screen is quite vivid and does a great job of displaying videos (even in HQ) and photographs. The audio output of the loudspeaker is pretty loud,and is sufficient while on the move. The in-ear headphones that come with the phone are quite comfortable and the sound quality is clear and crisp. The  high notes are quite sharp and the bass is quite deep. The phone doesn’t come with any games, but there’s LOTS of games that can be downloaded from the Android store. The inbuilt Android Music and Video player support many formats and are quite user friendly. The phone also comes with an in-built FM radio which can scan and store pre-set channels  and favourites.

The 2.0 MP camera leave a little to be desired but is quite easy to use with the stand-alone camera shutter button. Video recording is a breeze. The two things that would make the experience better are better focusing and the addition of a camera flash. The phone comes with all the standard camera effects for video recording and image capture. We did notice that Video capability on this camera was much better than still images. The Spice MI-310 is  a very easy to use phone. It has a very large phonebook, and the ability to sync  your contacts with Gmail, FaceBook etc. The biggest issue we faced with this handset was the microphone. At some point during the review the diaphragm of the mic got stuck and we got REALLY  BAD  voice quality. Now we dont know if this was a problem with the design of the phone or just this particular  piece but this is something to be wary of a little air dusting and light whack to the microphone fixed the problem. There were no signal issues for voice calls but we faced repeated issues with the HSDPA network. Eventually the phone refused to connect to 3G and remained in EDGE mode or WiFi (when we were in range). Switching the mode to WCDMA only via an app from the Android MarketPlace fixed this issue.

When it comes to typing on the on-screen keyboard, its a bit of a hassle in portrait mode (we have big fingers), but works brilliantly in landscape mode. The best thing about messaging is the speech to text function. The bottom strip of menu buttons (standard on most android phones) are a bit too sensitive and may cause unwated tension while typing. The phone has decent battery life, lasting for approximately  3-4 hours talk-time and around 48 – 60 hours standby depending on usage.

The Spice MI-310 is good to look at, lightweight and is feature packed for its price. The display is quite vivid and getting a capacitive touch screen for this price is amazing. The fact that this is an android phone opens up many avenues for customisation through the Google Marketplace. However, there were slight  problems that we faced with the microphone, the proximity sensor and the 3G which after resolution can make this device the only one in this price bracket with the brilliant spec list.

Check out the Remaining Images Below, Please Stay Tuned for Full Review Video. 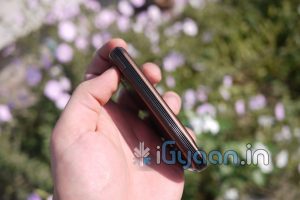 Anand Kapre
A gaming freak, A Computer geek and an important role player at iGyaan.in . He also is a maniac cook( loves his grill) and the founder of minecraft.co.in. Anand is dedicated to testing the devices to their core and finding the useful from the lifeless.
You Might Also Like
iGyaanLatestMobileSpice Mobile
Read More