The Gold Galaxy S5 Launched : Return of the Gold Rush? It seems as if Apple just started a whole new revolution in consumer electronics. After the release of the Gold variant of the iPhone 5S, it seems like every major company is experimenting with adding some glitter to their gizmos.

On Monday Samsung announced the release of the Galaxy S5 with a Copper-Gold(officially listed as “Golden”) back panel in India. Priced at 51,500, the flagship Gold Galaxy S5 also features the latest Android 4.4 Kitkat. It also features a fingerprint scanner on the home button, a heart rate sensor placed near the 16-megapixel camera, and the IP67 certification that makes it dust and water-resistant. We have already reviewed the white Galaxy S5 here. 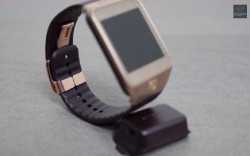 On the other hand Samsung introduced the gold clasp in the Samsung Galaxy Gear 2, giving it an opulent branded watch feel accompanied with the leather strap. The Gear 2 is a considerable enhancement on its predecessor, which looked like an overpriced toy watch.

Gold has captured the human imagination ever since its discovery. The obsession is evident in the fact that most our global economy is backed by gold. Gold in itself is a useless element, its rarity is its alibi for its exorbitant price. But its glitter is just too enticing for us to ever get over it. 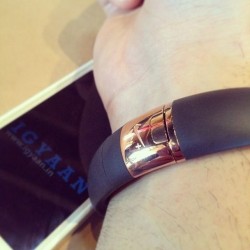 It’s not just the two mobile giants who are incorporating the golden hue in their design elements. Even HTC released the gold version of the M8 which is readily available in various markets. Seems like HTC has some serious gold fever, as they also launched a 24k limited edition HTC One M8.

The Rose Gold Nike+ FuelBand SE is a great example of this. The gold in this limited edition band also fueled the gadget’s luxurious appeal.

It seems now that a lot more companies will introduce gold in their design elements to quench the hunger for the golden glitz.

likethis
What's your reaction?
Awesome
0%
Epic
0%
Like
0%
I Want This
0%
Meh
0%
Posted In
Latest, Lifestyle, Mobile, Samsung, Tech
Tags
About The Author

Happy Nagashetti
iGyaan Network's newbie Happy is a Technological Hedonist, Traveller, Photographer, Curious Humanoid and a giant foodie who is always pumped up for new adventures.
You Might Also Like
LatestLifestyleMobileSamsung
Read More