Picture this: You order a pizza, and as always, 30 minutes later the door bell rings. You’re expecting a cheery delivery guy with the hot cheesy pizza you ordered. But wait, what if instead it’s being delivered by a flying drone?

A lesser-known pizza chain in Mumbai called Francesco’s Pizzeria, did just that last week. It succeeded in making a test-delivery, less than 3km away from its outlet in Lower Parel by using a remote-controlled, GPS-enabled drone. A four-rotor drone took off with the order from its outlet in central Mumbai’s Lower Parel area and delivered it to a high-rise building in adjacent Worli area. It dropped the 13-inch plain margherita pizza, weighing half a kilo, on the 21st floor rooftop before taking off again for the return journey. The speed with which the delivery was made thus beat the record for most leading pizza chains, which manually deliver pizzas within 30 minutes. The company claimed that it was the first time a drone has been used for such a purpose in the country. 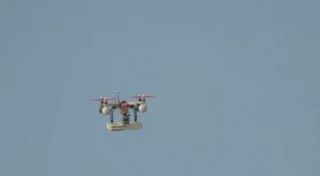 The drone used  was custom-made, said an official from the pizza chain, adding that an auto engineer friend of his had helped him make the flight possible. The official said the chain had carried out the test-delivery as an experiment because they want to be ready for when regulations in India loosen.

Since commercial deliveries by drones is not allowed in India, the ‘customer’ was  a friend of the chain’s CEO. It may not be considered an official sale, but in a way, it was a first time for an aerial product delivery.

Several roadblocks have ensured their limited use  and drones are mainly used in India by filmmakers. Legal restrictions make it clear that they are only allowed to fly between the altitude of 200 to 400 feet. They are also barred from flying over security establishments, and then there are the technical difficulties such as the limited operating radius of 8 km, after which their batteries go dry.

In the past, Taco Bell and Dominoes USA have attempted similar strategies. An idea called the TacoCopter — an app that would dispatch a drone to deliver a taco to your door — went viral last year, but the service is illegal under U.S. law as well. Dominoes USA tried pizza delivery which help of drone called ‘Domicopter’. Even Amazon has been in the news for testing and planning  an unmanned aerial vehicle delivery system since quite a while.

It’ll take some time for them to figure out the nitty-gritties, but this seems to be the future of quick-deliveries. Till then, it is working well for the companies as a marketing gimmick.