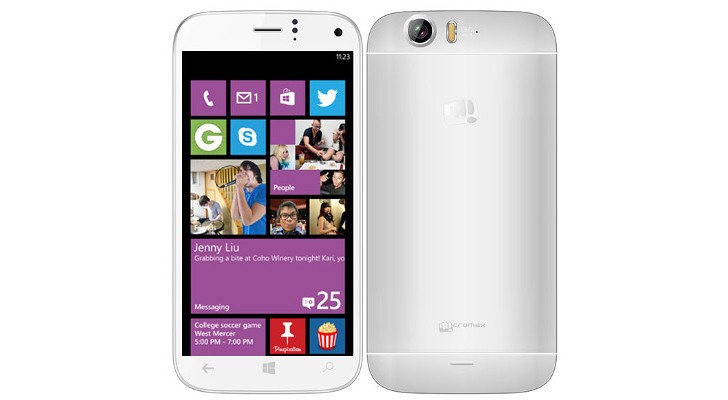 The biggest Indian mobile company is having quite a good year. According to several leads, Micromax has just decided to cross the Rs. 20K point and enter into the premium segment with a Windows phone. Microsoft identified Micromax as one of its hardware partners at its build conference.

In a first for Micromax, the Smartphone will be powered by Snapdragon 800 chipset with 2GB RAM. It will run Windows 8.1 operating system.

The main camera is a 13 megapixel shooter with LED flash. The selfie shooter is a 5 megapixel camera. The phone will have 16 GB of internal memory expandable to 64 GB which is a welcome step.

The specs look pretty impressive for a Micromax Windows phone. We hope to bring you a hands on review, as soon as we can, to tell you if it’s worth the glitter.

P.S: We would like to Thank AmitAgarwal2 for bring the update on the leak on this Story. The source on twitter Leakster Inc has stated that the Snapdragon device and the Windows phone are two different devices. As this is still a leak story we won’t confirm anything yet but we appreciate AmitAgarwal2 for being an awesome IGyaani .

Happy Nagashetti
iGyaan Network's newbie Happy is a Technological Hedonist, Traveller, Photographer, Curious Humanoid and a giant foodie who is always pumped up for new adventures.
You Might Also Like
Hardware NewsiGyaanLatestMicromax
Read More