by Happy NagashettiJuly 10, 2014
2
Now Reading
Newly Unveiled Adidas Fit Smart to Take on Nike and Other Wearables
Browse This Page This summer has seen wearable tech get a major boost. The market is getting steadily populated with devices from major companies like Samsung, LG and Motorola with many more on the way. After tablets, wearables seem to be the next big thing. Google is putting its weight behind the Android Wear project to further encourage and integrate the Android ecosystem. Now Adidas will try its luck in the market with a simplistic device called the Adidas Fit Smart.

This is not the initiation of Adidas in the wearable tech arena. The company released the MiCoach Smart Run smartwatch last year. The Smart Run can be connected to the online miCoach account and you can track your progress online and plan ahead. 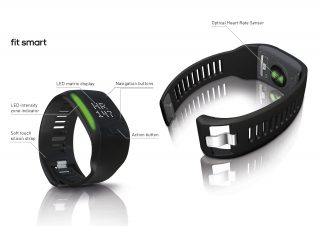 Adidas’s latest, the Fit smart will go on sale in August this year. The watch has the ability to track distance traveled, pace, calorie-burning and monitors heart rate. It can stand out against the competition because of the tracking infrastructure of the miCoach. Users who give up after taking a lot of effort to go out and run can use the personalized training abilities of miCoach and can be encouraged to keep going on. Its like having a personal trainer on your wrist.

On the design front the Adidas Fit Smart follows a minimalistic design. The display gives the most important specs like Pace, time, calories burned on the screen.  There is a small LED strip that change color based on the intensity of the workout. The strap is made of soft silicone. The watch can also be synced to a smartphone with the miCoach app for your in-depth data analysis on the move.

The company will also face some serious competition from the iGiant or as it’s better known, Apple. The company is slated to bring its smartwatch sometime later this year. The main competition to this is the Nike Fuel band which in comparison to the Fit Smart saves you a 100 dollars. But the Fit Smart gives more functionality and is an all-round trainer and not just a data gatherer.

Overall the simplistic design and competitive price will be a benefit for the Fit Smart. It can make a good market for itself if the device excels in what it has to offer, thereby encouraging more minimalistic wearable technology.

likethis
What's your reaction?
Awesome
0%
Epic
0%
Like
0%
I Want This
0%
Meh
0%
Posted In
Gadget, Hardware News, Latest, Top Around the Web
Tags
About The Author

Happy Nagashetti
iGyaan Network's newbie Happy is a Technological Hedonist, Traveller, Photographer, Curious Humanoid and a giant foodie who is always pumped up for new adventures.
You Might Also Like
GadgetHardware NewsLatestTop Around the Web
Read More