Both Motorola and Xiaomi aimed big with the launch of these amazing devices. Xiaomi Mi3 is elegant with amazing specs and attractive pricing, while Motorola provided a great deal with the Moto G, which broke all sales records when it launched. We understand that Xiaomi Mi3 offers way betters specs, but since both the devices come within the same price range, we thought it was important for them to battle it out.

Xiaomi is expected to take on most of the market with the launch of Mi3 because of the simple fact that the newly launched flagship device runs Snapdragon 800 and available at the price Rs. 13,999.

Xiaomi Mi3, as a solid unibody product looks fantastic and the built quality is admittedly amazing. Overall feeling of the device is great. On the other hand we have the Moto G with its replaceable back panel and an array of color options for back panels. Talking about specifications, Mi3 is equipped with a 1920X1080 px 5.0 inch display. While, the Moto G has a 720X1280 px which is at 4.5 inches. On the inside of Xiaomi Mi3 Qualcomm Snapdragon 800 quad-core chipset at 2.3 GHz. It also get Adreno 330 GPU where as with the Moto G, from the same price bracket, you get a quite a different set of specification. You get a Qualcomm Snapdragon 400 at 1.2 GHz with the Adreno 305 GPU, which is comparatively a disappointment.

In terms of RAM, the device comes with 2 GB, where as the Moto G has a 1 GB. While the internal storage of both the devices is  16 GB. What’s interesting in Mi3 is the powerful 3050 mAh battery while the Moto G sports a 2070 mAh one. We know Moto G has a phenomenal battery life, but we are yet to test out the Mi3 battery life which is expected to be pretty impressive as well. In terms of camera, the rear of Xiaomi Mi3 fashions a 13MP camera with a 28mm lens which also a wide-agle lens camera. It has dual LED flash and 1080p recording capability. Whereas Moto G is again dwarfed with its 5MP camera and its 720p video recording capabilities with no fancy camera features.

The game changer is the OS both of the devices run on. The Mi3 runs on Android 4.4.2 which has been customized with MiUi5 which actually very different from what you see in Moto G. Moto G’s Android version is almost a stock Android interface with a couple of things added by Motorola. Motorola will also be fast enough to give you updates. It comes with Android KitKat out-of-the-box, nowadays. It is a possibility that it will get the Android L update as soon as Google launches it. 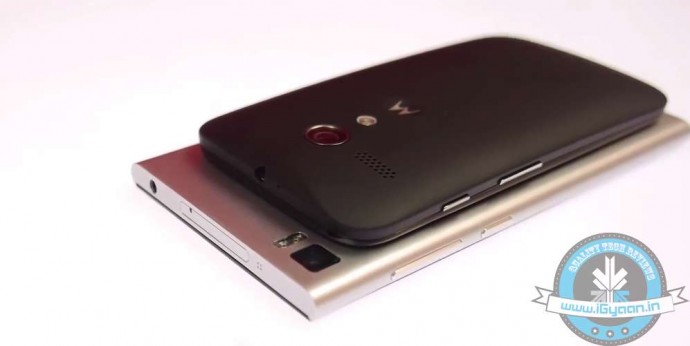 The Mi3 is 8.1mm in thickness, where as Moto G is a little hefty at 11.6mm. Moto G weighs 140 g where as the Mi3 comes at 145 g. The look, the feel, impressive specs and of course the attractive pricing, definitely puts Xiaomi a step above Moto G. If you were planning on  getting the Moto G, you might want to reconsider.

likethis
What's your reaction?
Awesome
0%
Epic
0%
Like
0%
I Want This
0%
Meh
0%
Posted In
iGyaan, Latest, Moto, Tech, Xiaomi
Tags
Moto G, vs
Moto G, vs
About The Author