Facebook announced on Monday that it will be removing the messaging feature from its mobile app over the next few days, and requiring people to use its standalone Messenger app instead. Hence, forcing users to download the Messenger app to chat with Facebook contacts on their mobiles.

“In the next few days, we’re continuing to notify more people that if they want to send and receive Facebook messages, they’ll need to download the Messenger app,” a Facebook spokeswoman said. 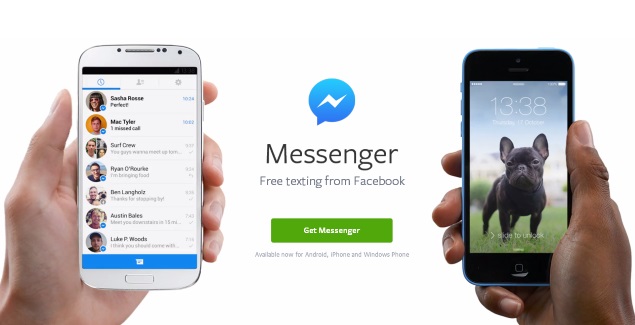 The change follows through on a plan announced in April and for now affects Facebook’s mobile app on iOS and Android. You’ll be able to send and receive messages on the desktop as before. The social networking giant told TechCrunch that it had seen “positive results” in Europe in terms of user engagement, and so decided to move ahead with rolling-out the standalone app to everyone. The company notes that users can continue to chat via the main Facebook app on iPad tablets, feature phones, Windows Phone devices, via Paper app, and the Web-based desktop interface. The company said that this move is to make the Facebook messenger, the best app for messaging. It is also an effort to avoid any confusion that might arise from having two mobile products for the same thing.

The move will also greatly increase the number of people who use Facebook Messenger. CEO Mark Zuckerberg said on the company’s earnings call last week that Facebook was looking to turn Messenger into an important business. Messenger currently has more than 200 million monthly active users—just under a fifth of Facebook’s total user base. It can handle Internet-based voice calls, group chats, and exchanging photos and short videos, as well as sending text messages.

Facebook says the change will help improve the performance of both the apps over time. It’s already working to improve Messenger; the company recently hired the former PayPal President David Marcus as part of a push to build new capabilities for Messenger, possibly including payments.

Earlier this year, Facebook had announced an agreement to acquire WhatsApp, which also handles Internet-based messaging. Along with that the company also launched its own Snapchat-like app called Slingshot which is not well received.

Slingshot may not have performed to the company’s expectations, but when you have a billion plus subscribers, you have the freedom to force them to use an additional app which only performs a part of the function that the current app does. But we are ourselves are so addicted to this man’s creation that we will do as he commands and give some more of our phone storage and RAM to conquer.

Parul Ritvik Sood
iGyaan Network's newbie, Parul is a Writer, Poet, Reader and Mass Communication Graduate with great interest in startups and entrepreneurship.
You Might Also Like
FacebookiGyaanLatestLifestyle
Read More