When you talk of curved convex displays, LG immediately pops up in your mind. Why wouldn’t it, LG was the first company to come with a curved display on a smartphone (LG G-Flex.) It has proactively marketed itself as the curved screen master. But its compatriot and global electronics giant; Samsung is not going to let LG have a free run. The company has introduced consumer level curved displays for just around $450.

Samsung had recently wowed the audience at IFA Berlin with a massive 105 inch screen that can bend at a press of a remote. In July, it had also released a curved 105-inch 4K TV which cost a king’s ransom of $129,000 which converts to around Rs. 78,48,360. I’d rather buy a Tesla Model S which comes at almost half the price, well if you want to dream, dream good, right? 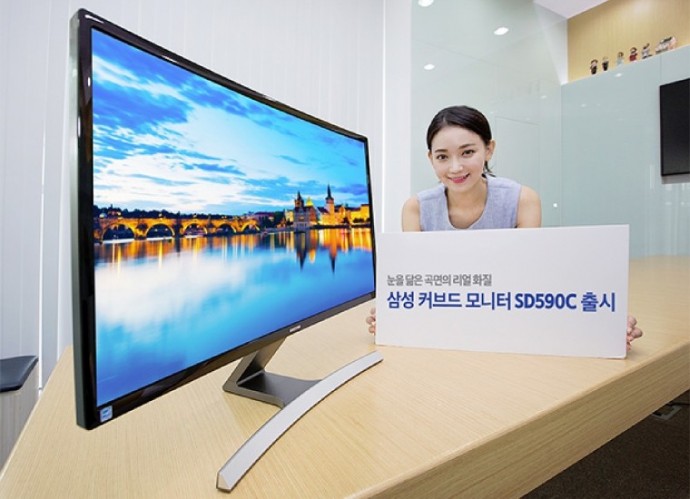 Coming back to the display at hand. The new curved monitors have 27-inch display. They have a contrast ratio of 3000:1. It would be great for a desktop monitor or for a gaming system.

Samsung UK’s Phil Gaut claimed that the S27D590C offers “a truly immersive and unforgettable experience. It takes movie watching and gaming to new heights, from the monitor’s unique curved screen and comprehensive entertainment features to the incredible picture quality and the impressive sleek design.”

Samsung has included a feature called the Game mode. This feature, the company claims, intelligently detects on-screen changes and corrects blurry images. It also enhances colors and alters contrast for improved visibility of in-game action. According to the company, the curve of the screen also provides a wider field of view and a greater sense of depth.

The monitor definitely looks impressive and is the cheapest curved screen option out there. The price is great for what it offers. We hope it comes to India soon so we can get our hands on it and know for sure of its “immersive and unforgettable experiences” capabilities. Come on Samsung, we have given you a lot of business; we deserve this treat.

likethis
What's your reaction?
Awesome
0%
Epic
0%
Like
0%
I Want This
0%
Meh
0%
Posted In
Displays and Monitors, Entertainment, Hardware News, Latest, Samsung
Tags
About The Author

Happy Nagashetti
iGyaan Network's newbie Happy is a Technological Hedonist, Traveller, Photographer, Curious Humanoid and a giant foodie who is always pumped up for new adventures.
You Might Also Like
Displays and MonitorsEntertainmentHardware NewsLatest
Read More