The Moto X was the reason Motorola was able to bounce back from extinction. With the help and financial backing from Google, Motorola revamped their lineup of smartphones and today is one of the most coveted Android smartphone manufacturers. Although Motorola was unloaded by Google to Lenovo, the company’s principles have remained similar. With the Moto X 2014 Motorola is back with a vengeance, giving you the best mix of hardware and performance.

The new Moto X aka Gen 2014, is a major overhaul of what was already an impressive kit of a smartphone. The great mix of design build quality and top notch hardware makes the phone an aggressive competitor in the major smartphone market. In most countries the phone is available on the cheap with a contract, in countries like India however it has to be bought outright. Its price at launch is Rs. 31,999, which is much higher than the last generation’s price.

Unlike the previous edition, the new Moto X is not impaired by old tech, it’s packed with a Qualcomm Snapdragon 801 chipset with Adreno 330 graphics, has a larger 5.2 inch display with a Full HD resolution. New optics include a 13 MP camera with a faux dual led ring flash, and a front facing 2 MP one. The rear camera does 4K video and slow motion at 1080p which is really impressive. Storage is limited to 16 GB and RAM is kept at 2GB.

Thanks to the Stainless Steel frame, the Moto X is one of the most robust smartphones in the market, the reinforced design with the lack of easily ding-able parts makes the phone more sturdy than expected. The Moto X will not bend, not with your hands, and many videos are trending online to prove it. The phone is solid and engineered well, but the leather finish will not last. We used the phone for a mere 2 weeks and the leather at the back has a lot of nicks and cuts and basically wears easy, the bamboo variant of the new Moto X 2nd Gen costs an additional Rs.2000 but may be worth the moolah. Design is great, however, we are not too sure of the lager Moto logo in a steel insert, it looks great in the leather variant but not on the wooden one. Reactions have been mixed about that one bit, everything else is an excellent change up from the 1st gen. Stainless steel bezel adds premium class and functionality and looks good, the shape is well fitted and curves just right in the hand. It is a handsome smartphone and its built well. 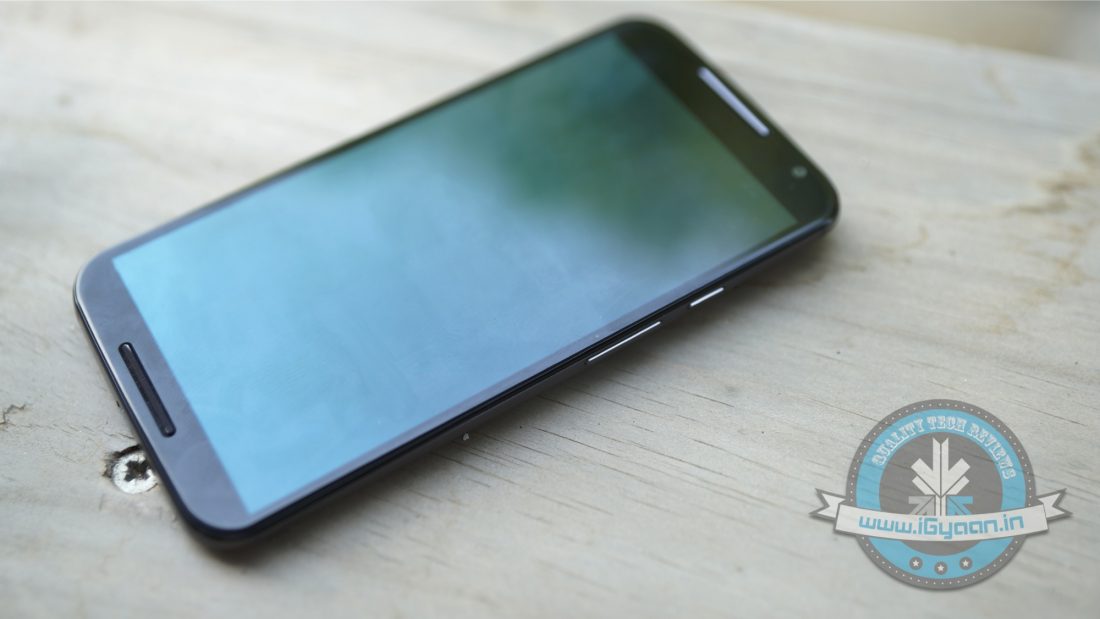 The overall performance from the handset is impressive, it runs top notch hardware on an almost vanilla build of Android 4.4 with an experience  only south of Google’s own Nexus line. Benchmarks score upwards of 40,000 in Antutu and they translate to real life usage, RAM is managed well and the Moto X remains pretty smooth through the day of use. Motorola has managed to use its own features like, smart notifications which are now called “Moto Display” and the new voice assistant which can be called up by a custom phrase and not the traditional “Ok Moto” or “Ok Google Now”. Motorola has also managed to leverage Moto communicate, allowing for phone calls and SMS messages to be received and responded to from your laptop/computer, while the setup may seem tedious it works well, although is a major drain on the battery life.  The new Moto Assist is also well rounded, it knows when you are sleeping, driving or whether you are at home or work and can customize the alerts according to that, it needs a basic setup, but works mostly flawlessly after that. The camera is a big upgrade, a 13 Mp sensor, 4k video and 1080 slow mo, all sounds great on paper. Images however do not justify all that, they are still grainy and low light performance is terrible. Continuous burst mode is a great feature, but is randomly sluggish and will cause images to get blurry and out of focus. The concept of the ring flash is simulated and does do nothing really to enhance the image quality, although the color correction in post flash images is good. The flash module is just like any other on any other smartphone. The camera app is really basic and could use some better features, like filters and on the fly changes. Focus during video will jump in and out, and will cause heartache. 4k video sounds great, but the limited 16GB storage will fill up with just mere minutes of 4k footage. Slow motion works well, focus is tight and quality is impressive. It will do Slow motion at 1080p vs 720p in the last year’s model. The front camera remains basic with a 2MP snapper, it captures 1080p video, which is usually overexposed and grainy, not the best optics in the lot. 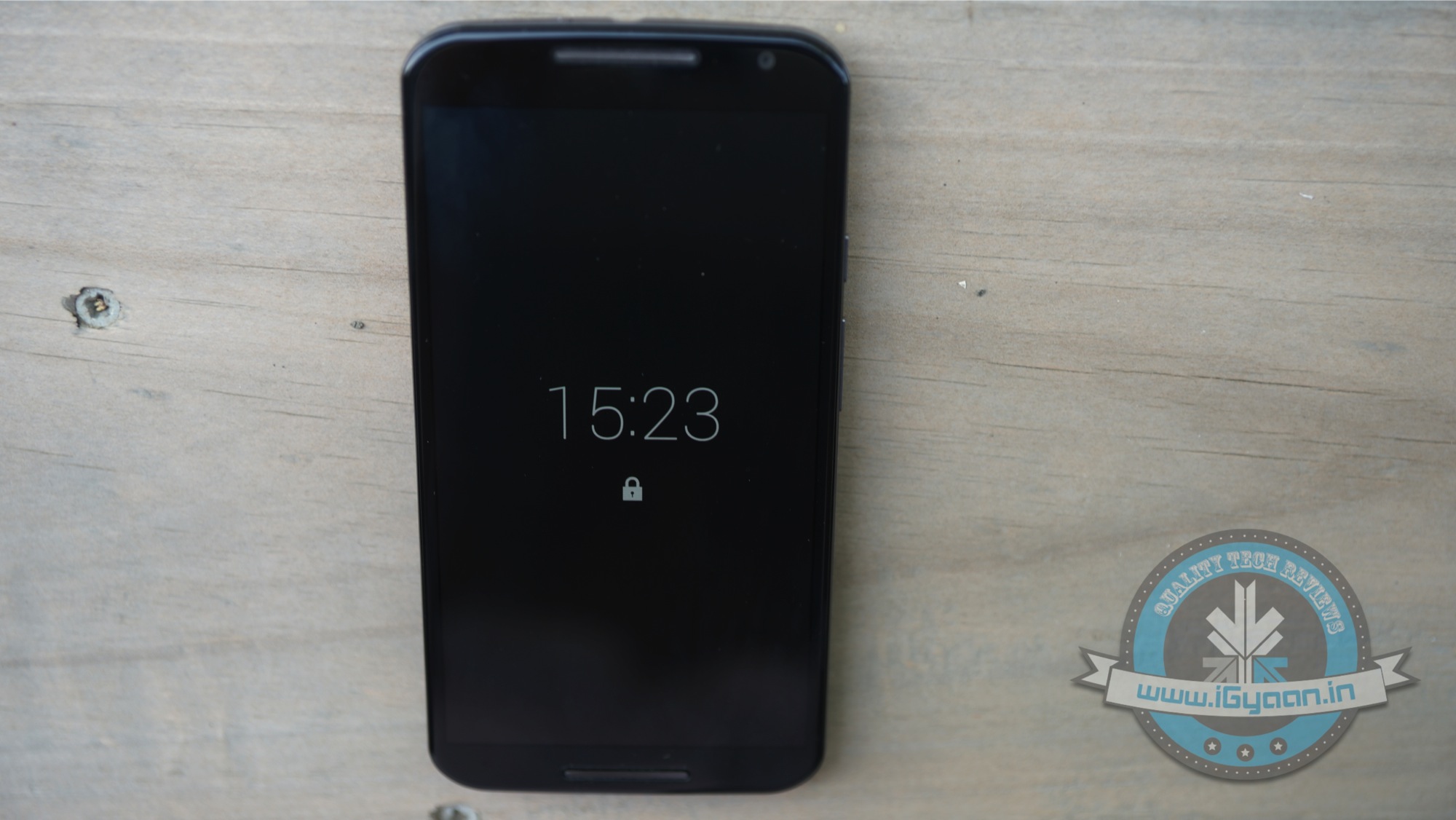 The new display on the Moto X larger and brighter, looks good outdoors, and has a crisp 401 ppi density. The glass on the front is Gorilla Glass 3 and it rounds off and meets the bezel at the edges adding to a natural feel when using the touchscreen. The display has excellent viewing angles and looks great indoors and out doors. touch response is excellent and according to Motorola the whole ecosystem is run at 60 fps throughout which adds to the experience, although may not be perfectly accurate. The bezels on the front are really minimal so the display is what takes up most of the front adding to a better look and better content consumption. Thanks to a larger display you will enjoy watching movies and videos on the phone, performance is excellent so no lag or buffer is experienced in the usage of the phone. The speaker is now forward facing, but unlike HTC’s boomsound it’s still a single speaker , yet sounds good and is very loud.

The Moto X 2nd Gen uses the metal fame to boost networks and boy does it work well, we found excellent indoor reception even on 3G networks and no call drops. This goes to show that maybe not all networks are to blame for bad reception. In this case Motorola has really got its antenna design right and yes it is very functional. Call quality, thanks to the impressive reception, is better than most handsets, although noise cancellation is not very great. Microphone is sensitive and the earpiece is loud and crisp. Battery is a smallish 2300 mAh unit that will mostly last a day, but if you use your phone a lot a portable charger or a USB cable will soon become your best friends. Averaging a mere 4-5 hours of talk time, we wish the phone had more juice to go on about its day. If you need the new Moto X to last longer you may want to invest in the Turbo Charger. Although, not yet in India, this optional accessory can charge the Moto X incredibly fast, pumping in eight hours of power in just 15 minutes. Motorola has a winner with the Moto X 2nd Gen, and while a lot of people are looking at the bump in price, we are looking at the bump in specs. The previous Gen Motorola Moto X was underpowered, under spec’d and smallish. The new Moto X, is powerful, has excellent specs, top notch performance, has the right size and it looks good doing daily deeds. The leather back is tastefully damage-able and will add a custom look to each Moto X, however extreme wear may happen sooner than later. Thanks to quick Android updates and a simple basic Android UI, the handset is customizable and fast from the get go. The display bump is a boon and is well received, the new design is flawless and the built appreciable. The phone is also water resistant and will last you a very long time. But, should you get it? If you want an android phone now, and the price bracket fits, Yes ! get it now. Alternatively wait for the OnePlus One launch or the Next Nexus, which may as well be a Moto X in a cheaper format, who knows?

Bharat Nagpal
Founder and Chief Editor of iGyaan. Bharat likes to keep on top of technology ! Follow Him on Google Plus : Google+
You Might Also Like
LatestMobileMotoReview
Read More