A few domestic manufacturers have launched handsets sporting the Microsoft’s Windows Phone OS, for instance, the likes of XOLO with the launch of their Windows Phone 8.1 OS smartphone, the XOLO Win Q900s. The Redmond-based giant, Microsoft, at its Build Conference in San Francisco announced a few hardware partners for the Windows Phone platform, and you guessed it right, Micromax was one of them.

It’s just been two months since the announcement, and Micromax has already launched the Canvas Win W121 at a relatively economical price of Rs. 9,500.

The Micromax Canvas Win W121 runs the latest Windows Phone 8.1 OS and is powered by the Qualcomm Snapdragon 200 quad-core CPU clocked at 1.2 GHz bundled with 1 GB of RAM. Priced at just under Rs. 10,000, it should have a lot of rivals in the over-crowded budget category of smartphones. Boasting a 5-inch HD IPS screen, it can be pitted against the likes of the XOLO Win Q900s, the Lumia 520 and 630 as its closest rivals. The Canvas Win W121 is powered by the Qualcomm Snapdragon 200 SoC with four cores clocked at 1.2 GHz, a chipset we are quite used to in this price segment. It has decent enough 1 GB of RAM with a 5-inch 720p HD IPS display, and a 2000mAh battery capacity. It has 8 GB internal memory expandable via microSD up to 32 GB. Connectivity options include GPRS, EDGE, 3G, Bluetooth and USB.

Optics includes a primary 8MP camera with AF, along with a 2MP secondary cam. Specs on the phone do look good but do they translate into real-time performance. Let’s find out.

The Canvas Win W121 does have that niche look to it, courtesy of a leather (read: p-leather) back panel, something we saw on the Galaxy Note 3. There’s a lot of plastic on the body, which might be a turn-off for some of us, but the Canvas Win W121 is a bit sleeker and more compact than any of the Canvas’s Android counterparts. 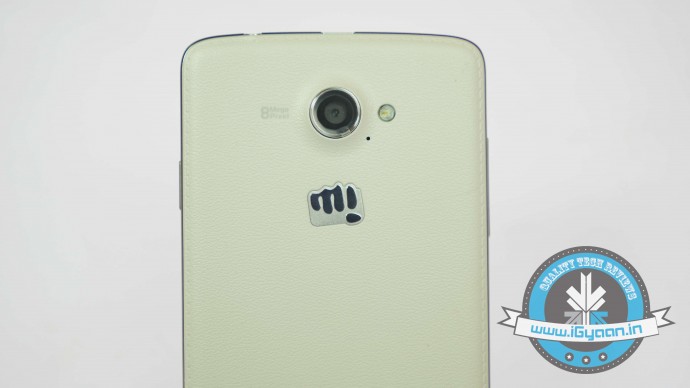 With a 5-inch screen, the device fits in the hand quite well; it is slim and makes for easy one-handed usage. The front houses three capacitive buttons with a Windows logo in the middle, which was absent in the XOLO Win Q900s. However, the capacitive buttons appear to be a tad untidy and seem like a rushed job. They don’t illuminate the way we have seen with other phones, and just lacks the finesse.

Coming to the sides, it has a metal rig that runs throughout the phone’s entire body, with volume rockers placed on the left and the power button on the right. The keys have a nice touch feel to it. Meanwhile, both the MicroUSB and headphone jacks are located on top. 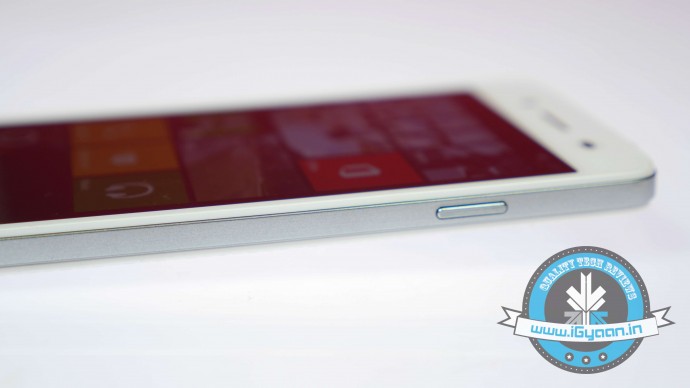 As already mentioned, the rear of the phone has a premium looking leather-esque back panel with stitches around the edges, giving it a more classy appeal. It’s a neat job done on the rear of the phone, with cuts for the camera, flash and external speakers done with absolute precision along with the Micromax logo. The back panel is removable that houses the two SIM card slots, battery and the microSD slot. The phone does impress us when it comes to build quality and design. With a Qualcomm Snapdragon 200 chipset clocked at 1.2 GHz bundled with a healthy enough 1GB of RAM, handling everyday usage is like a walk in the park for the Canvas Win W121. It handles multiple apps at ease without any noticeable lags. We did not see any problem using any app, they load up real quick and with Windows Phone 8.1, it allows users to run eight apps in the background. You can navigate and switch between emails, games and other apps like Facebook and WhatsApp in no time.

Moreover, WP 8.1 not being a very power-hungry OS combined with decent hardware results in no issues in launching apps, browsing through the internet or switching apps. In our AnTuTu benchmark test for Windows, the phone managed an impressive 11, 767 points, just edging past the Lumia 630 which managed 11, 760, also surpassing the XOLO Win Q900S which scored 10, 870 in our Antutu Benchmarks.

High-end games like Real Racing and Asphalt 8 do give the phone a real tough time as the phone starts heating up. That said, the overall performance is quite satisfactory on the Canvas Win W121. Apart from the heating issue, these games run quite well at the highest settings; there aren’t any noticeable hiccups during performance specific stressful instances and loading time is just fine. Considering the price of the phone, this shouldn’t be much of an issue, and arcade/basic games like Subway Surfers and Temple Run look and play quite well on the phone.

Coming to the OS, the Canvas Win W121 runs on the latest Windows Phone 8.1 OS. The OS has a neat refreshed feel to it, with those signature Live Tiles, and the new action centre that was missing with earlier version of the platform. The OS now looks much more functional and complete. 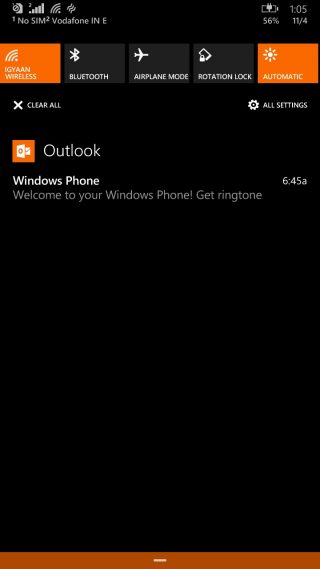 It looks really neat and brings along a slew of nifty features with a lot of customisation options. The new Swipe keyboard feels great, Data sense and Wi-Fi sense keep a tab and look after your data and Internet usage, meanwhile Storage sense offers easy ways to organise your data. 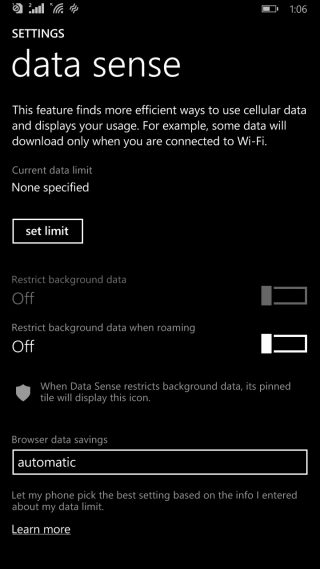 The phone offers dual-SIM support, and the OS offers an exclusive section to manage the SIMs along with setting the default SIM slot for calls and 3G. 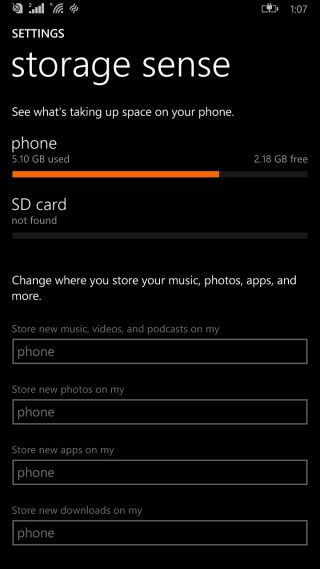 Not to forget Cortana, a real life personal assistant, who has a quirky attitude and makes interaction with the device a lot more fun. She can gather info, manage your appointments, set alarms, dictate your messages and can do a lot more. She definitely adds to the whole OS experience. (NOTE: Cortana is not available in India as of now, though users can change the phone settings to US to make it functional).

As already mentioned, WP 8.1 as an OS does not demand a lot of the phone, so navigating and switching between apps is quite smooth. Compared to its previous iteration, WP 8.1 is a significant improvement with faster loading, a better keyboard, nice touch response and an interactive personal assistant is quite a ride.

However, the device does not have support for apps that we saw in the Lumia range. This smartphone is devoid of popular apps like Here Maps, Nokia Music and all the camera apps.

The Canvas Win W121 has an 8MP primary camera with flash, which in our opinion should have done better. The images captured lack texture and the colour reproduction is quite lame. They appear dull and washed out which takes away the overall feel of the photos. Another issue is absence of the Nokia Camera app, users will have to rely on the default camera app. Meanwhile, the front has a 2MP snapper which just does its job. Its lens is not that wide either, which makes it quite a task to take wider selfies.

Low light isn’t great either as the lack of OIS is apparently clear and images appear a bit shaky. We also noticed that the AF of the camera takes a very long time to focus on a particular object, which can be quite annoying at times. Also, there’s no support for HD recording, videos are recorded at 480p, which is quite a bummer as the chipset can support 720p recording. Finally, it will be fair to say that the camera is perhaps one of the weaker links of the phone.

The phone features a 5-inch 720p HD IPS display, which is rather brilliant with sharper texts and offers great readability in all lighting conditions. Even in well-lit conditions, the readability is quite good. Moreover, you have options to adjust brightness as per requirements. The display renders sharp colours and great viewing angles. Being a 5-inch screen, it does add to the whole experience of watching a movie or playing a game. Powered by a dual-core clocked at 1.2 GHz with 1 GB RAM, the multimedia performance of the phone is quite good. We tested Asphalt 8: Airborne and it ran absolutely well; not flawless, but there are no major lags and stutters that would take away the overall experience of the game. The phone can withstand those frame rates; though surprisingly, it could not run a 720p HD movie. The phone just could not withstand those frame rates and transitions while playing a 720p HD movie. Max resolution possible is 480p, which is a major let down.

However, the audio performance of the phone is awesome. The phone’s external speaker is bit loud and renders good sound quality while playing games, watching a movie or listening to music, it does pack a punch. Moreover, the earphone set provided as a part of the standard accessory is also high quality, something which other OEM’s should strive for.

The call quality of the phone is really good whether incoming or outgoing, and the signal reception is excellent indoor as well as outdoor. Coming to network, the phone latches onto the networks around at ease, thanks to a lot of plastic which has significantly improved Wi-Fi connectivity across most Micromax devices, including this one. Priced around the Rs. 7,800 , the Canvas Win W121 is a decent choice if you are on a lookout for a smooth overall Windows experience without any compromise on screen size and build quality. It has some great features but completely misses out on other aspects. For instance, lack of support for HD Playback, lack of decent camera apps might make you consider other alternatives. Though, it has a solid 5-inch display and is great for everyday usage. It could have been a top-notch smartphone if some of these aspects were not missing.

The Canvas Win W121 can compete against the likes of the Lumia 630 and the XOLO Win Q900s. Though, there are much better Android options available at the same price point.

Abhinav Mishra
iGyaan Network's Newbie, Abhinav Loves Gaming, Cars and Technology, You can Find Him on PSN Bragging About his FIFA Skills.
You Might Also Like
LatestMicromaxMobileReview
Read More