Space travel is an amazing and audacious task. Over the course of last 60 years, we have made incredible advancements in the field of space research and space travel. We were literally catapulted to the technology age just through our investments into space travel. Milestones after milestones have encouraged us to peer further in the history and workings of the universe, and how it’s connected to us. We did face some political difficulties in the middle that slowed down our efforts into space, but seems like things are looking up again with the Rosetta mission by the European Space Agency (ESA). The Rosetta mission created history today by landing the first human object on a comet.

Comets are the building blocks as well as leftovers of solar systems. The comet in spotlight currently is called 67P/Churyumov–Gerasimenko, or if you are not in the mood for a tongue twister, you can simply call it 67P. Rosetta had to embark on an arduous journey of 10 years to reach the comet. Image from first rendezvous of Rosetta with Comet 67P.

The planning for the Rosetta mission began almost 25 years ago. The mission was launched on 2nd March, 2004. It reached the comet on 6th August, 2014. Since then it vigilantly orbited around the comet. The space probe features 12 instruments, and the Philae robotic lander, with an additional nine instruments. It’s this Philae lander that created history by being the first human made object to reach a comet. Rosetta mission will orbit 67P for 17 months and is designed to complete the most detailed study of a comet ever attempted.

Philae did cause a bit of a scary moment for the scientists as for some hours they were unsure if the lander was able to hold on to the giant rock in space. Apparently, the comet bounced back two times before landing on the comet in its third attempt. The bouncing happened because the thrusters and anchors which were supposed to aid in landing failed to operate. Don’t blame them, they were in the cold dark space, cramped up for 10 years, might have found it hard to stretch their legs. 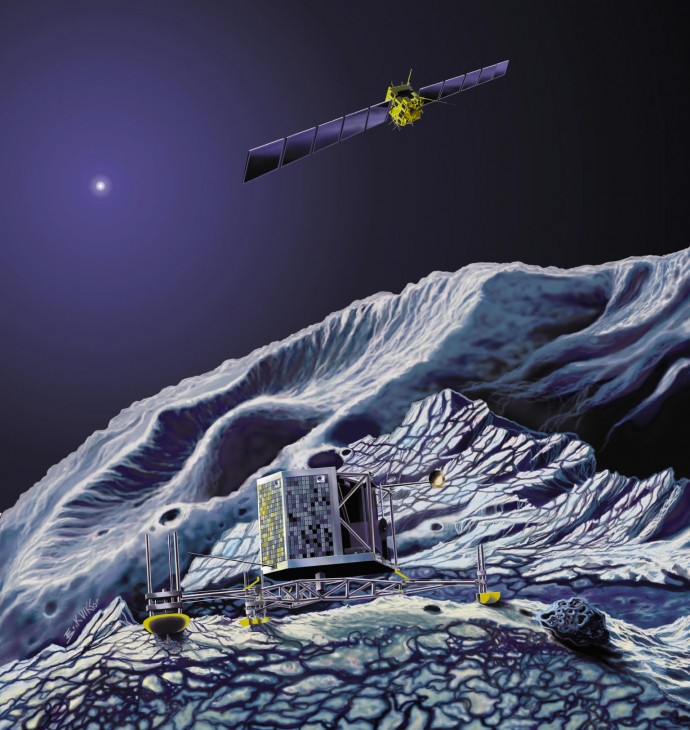 Rosetta and the Philae Lander will journey with 67P to uncover the roots of life.

It was not an easy feat to achieve as told by Matthew Genge, who is a lecturer in Earth and Planetary Sciences at Imperial College, London.  He said, “This is the most difficult landing in space history, like landing a balloon in a city center on a windy day with your eyes closed.”

The scientists report that the lander is safe and stable, but they are unsure if they’ll be able to drill into the surface to collect samples. They say that the loss of anchors might make it difficult to drill. It is being said that the probe has landed on a soft layer of dust. But considering it’s a once in a lifetime opportunity, the scientist will make the best of it.

Rosetta and Philae will tag along with 67P for its journey around Sun. The mission will be able to answer some questions that we have been asking for a long while, like where did all the water on Earth come from. It is for long been theorized that comets brought the water and building blocks of life from outer space to Earth. If Rosetta proves that, we’ll have added another ancestral root to our family tree. So, go on Rosetta, live long and prosper at a place where no man has gone before.

ESA also made a Hollywood grade short film to explain the importance of the mission. It stars Aiden Gillan from the Game of Thrones.

likethis
What's your reaction?
Awesome
0%
Epic
0%
Like
0%
I Want This
0%
Meh
0%
Posted In
Latest, Tech
Tags
science
science
About The Author