In today’s highly competitive tablet market, manufacturers are bound to offer an interesting set of specs just to have that slight edge over their rivals. Lenovo recently launched its Yoga Tablet 2 in an attempt to make a mark in this overcrowded tablet market. Does it have what it takes to compete against the big boys including the likes of iPad Retina, the Galaxy Tab 4 or for that matter, the wildly popular Nexus 7. Based on an entirely different form factor, a decent set of specs and a Full HD display, the Yoga Tablet 2 was dying to come to our test lab for a review, and we did not disappoint it.

Strategically priced at Rs. 20,990, the 8-inch Lenovo Yoga Tablet 2 packs a rather interesting set of specs along with a very innovative design. But does it packs enough punch to become a tablet worth shelling out your hard-earned cash? Let’s find out: The Yoga Tablet 2 830LC is powered by an Intel Atom Z3745 quad-core processor clocked at 1.86 GHz. It has a massive 6,400mAh battery that should provide enough juice, while optics includes an 8MP f/2.2 rear camera along with a relatively docile 1.6 MP front snapper.

On the memory front, the Yoga Tablet 2 offers 16 GB of inbuilt storage expandable up to 64 GB via MicroSD bundled with 2 GB of RAM.

The 8-inch form factor of tablets is always considered rather comfortable, so the Lenovo Yoga Tablet 2 comes across more of a paperback. It allows easy one-handed usage and comfortably slips into your briefcase making it ultra portable.

To kick things off, the first thing that will grab your attention is the tablet’s all metal-magnesium alloy body. Perfect balance of right build and design is what you can expect from this tablet. There’s something intriguing about holding the Yoga Tablet 2; the alloy body gives it a very niche look, being lightweight at the same time. The real kicker is the nifty stand that flips out in three positions, offering great comfort and viewing angles, no matter which way you want to use it. Whether you’re lazing around or sitting upright at your desk or for that matter even while working out, it truly emanates that hands-free experience. In addition, there’s also a hinge hand that makes it very comfortable to hold on to. 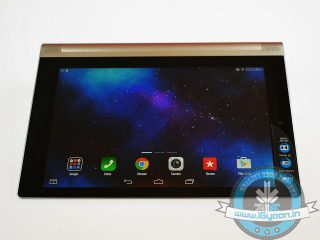 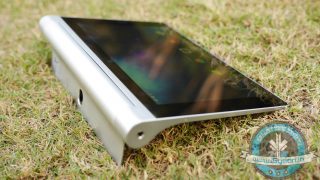 Certainly, it is one of the most innovative designs at the moment from the usual rectangular slab we’re used to. Be it catching updates from IGN or watching Homeland, you’ll simply love the hassle-free usage.

However, there’s only one USB port in the entire device with no HDMI slot, which is kind of lame and can certainly put off prospective buyers.

Given the price of the tablet, it is quite remarkable to have a Full HD display at this price point. The 8-inch screen renders vivid colours and excellent viewing angles. It’s a great device with a gorgeous display whether you’re watching movies, browsing and even gaming. We were quite impressed with the tablet’s 8-inch display. Playing games or watching your favourite TV sitcoms on the Yoga Tablet 2 is no doubt fun. In addition, the front-facing Dolby stereo speaker packs enough punch that further enhances the whole multimedia experience. Lenovo Yoga Tablet 2 is an entertainment powerhouse. 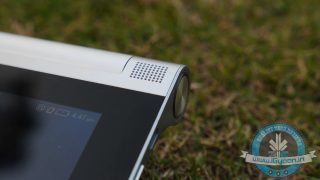 The camera on the Yoga Tablet 2 is apparently its only weaker link. Optics includes an 8MP primary camera. Meanwhile, the 1.6 MP front camera is only decent enough for video chats. There seems to be some issue with our review unit’s battery, so we were not able to take camera samples as the camera unit was detecting low battery backup. Going by the specs, it’s safe to assume that the camera is one of the weaker links of the tablet. Eventually, we had to give the camera a very low rating which has affected the tablet’s aggregate score.

The Lenovo Yoga Tablet 2 runs on a forked version of Android 4.4 KitKat with a highly customised UI on top. The UI is very reminiscent of the iOS with the same dropdown menu including the home screen.

Hence, there’s no app tray which some of us would not be comfortable with, but overall, the UI is quite user friendly with nicely laid icons. It will depend on users whether they find Lenovo’s tweaked UI useful. The new layout and icons would need getting used to, though there are some nifty pre-loaded apps that will certainly come in handy for users. Have a look at the screenshots below: The 8-inch tablet has a relatively powerful Intel Atom Z3745 quad-core processor clocked at 1.86 GHz. The chipset is perfectly capable of handling multiple apps and runs graphically intensive titles like Asphalt 8 without any hassles. The chipset combined with a hefty 2 GB RAM further bolsters the tablet’s performance, leaving enough room to run multiple apps at the same time.

The tablet’s benchmark scores are quite impressive and translate into real time performance. Yoga Tablet 2 can handle everything thrown at it from 1080p flicks to graphic intensive games like Asphalt and Real Racing. Have a look at the benchmark scores below: In terms of connectivity, the Yoga Tablet 2 offers great mobility with 3G, Wi-Fi and Bluetooth capabilities including support for 4G LTE. There’s also a SIM slot just in case you’re not in a mood to switch devices. As there’s no internal speaker, one needs to find a suitable place to have a conversation apparently. And of course, you have other options like Bluetooth, earphones etc. The 8-inch tablet powered by a Li-ion 6400mAh battery looks quite superb on paper. The battery unit is much larger as compared to the iPad mini and Nexus 7 2013 which come with 4490 and 3950 mAh units respectively. Once fully recharged, Lenovo claims that the battery can last for 18 hours. Though, we would not be able to give you an accurate measure of the tab’s battery performance as our review unit always shows the battery level at zero percent. Still, we could use the tablet for two days in a row after charging it once. The screenshot below might give you a general idea of the tablet’s battery performance. So eventually, this has affected the tablet’s overall rating as we had to give a 5 on 10, which otherwise would have been at least 7.5.

Lenovo Yoga Tablet 2 hits the right spot in terms of performance, a Full HD display, innovative design and ease of use. The tablet features one of the best designs in the tablet market, compliments to the nifty little kickstand that significantly increases its usability.

Apart from the relatively docile camera unit and lack of HDMI connectivity that is rather surprising, the Yoga Tablet 2 has all the attributes you would look for in a mid-range modern day tablet. If you are planning to invest in a mid-range tablet with a great display and top-notch performance, the Lenovo Yoga Tablet 2 should suffice all your needs. It has the attributes to give serious competition to the iPad mini 16 GB and Nexus 7 2013.

Abhinav Mishra
iGyaan Network's Newbie, Abhinav Loves Gaming, Cars and Technology, You can Find Him on PSN Bragging About his FIFA Skills.
You Might Also Like
AndroidLatestLenovoMobile
Read More