by Happy NagashettiJanuary 25, 2015
0
Now Reading
This Indian Start-Up is Making Learning Fun With Motion Based Games
Browse This Page Education is an essential requirement for the growth of a nation. Especially in a democracy, education matters the most because we are ruled by our ideas, and an illiterate or ignorant population is easy to influence and misdirect. India has a massive population, a considerable percentage of which is illiterate (25.6% according to 2011 Census). It is shameful for a nation with the third biggest economy in the world that a quarter of its population is not capable of becoming informed and empowered citizens. The technology age can provide solutions to this problem and young entrepreneurs across the country are working to take on the problem of illiteracy. One such company is Nayi Disha Studios.

Founded by graduates of BITS-Pilani and Stanford University, Nayi Disha uses motion-sensing technology based games to bring a new approach to the art of teaching. Classroom teaching can get mundane especially for the preschoolers who are not used to sitting at one spot for an extended period of time. Here, Nayi Disha’s game-based education helps them learn while having loads of fun. Their products are currently installed at several prestigious schools and pre-schools in Mumbai, Pune, Ahmedabad, Bangalore, Hyderabad, Jaipur, Delhi, Gurgaon, Noida and many more cities throughout India.

We had a conversation with the Co-founder of Nayi Disha; Mr Kartik Aneja. He walked us through the workings of this innovative new pedagogical experiment. At present, Nayi Disha caters to preschoolers. What makes their systems special is that there is no keyboard, mouse or touch involved. Using sensors like Leap motion, Intel RealSense, and Microsoft Kinect, these games track and react to the child’s movement.

Kartik says that he had his ‘light bulb’ moment while he was interning at HP Labs. There he came across the Aakash tablet which was yet to arrive in market back then. He says that he was excited at first but after spending thirty minutes with the device he realized that it wasn’t that great, and he had a splitting headache. That’s when he thought that even he can make something better than the tablet and so got into creating his own product.

All the games of Nayi Disha are centered around a character called Kaju. Each game starts with Kaju going on an adventure or getting into trouble, which then transforms into a fun lesson. The games are based on concepts like number line, flying through space, comparisons, heavy and light, water cycles and more.

Kids love it, it’s as simple as that.

When asked about the feedback from children, he had just this to say, ”Kids love it, it’s as simple as that.” He further added,“ these kids are sitting all day at one spot and even in the most hands-on class; they are still sitting in a confined place. They have so much energy in them, and they are only waiting for the Kaju period or Nayi Disha period where they can just jump around and do whatever they want.” Kaju, the lead character of the games.

The games are fun, but what are long term prospects of this kind of education? Kartik replies that it’s evident in research that kids learn at different paces. Some kids learn by looking, some by listening and there are some who learn by moving around. Each class has a category of learners called kinesthetic learners; children who don’t learn in regular classrooms, who are termed the naughty ones. For them, this technology is great.

Research is an important aspect for educational game creation and Nayi Disha pays active attention to it. Kartik’s team regularly interacts with teachers from a lot of different schools. Even before beginning any work on their project, Kartik and his co-founder spent a considerable time at a school in Ahmedabad to gain first-hand experience with the kids. They rode with the kids in the bus to school and then spent the entire day with them. They observed their needs and capabilities through the course of the day. 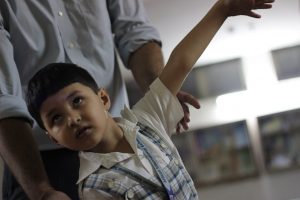 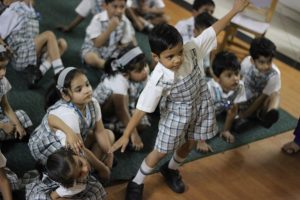 On the hardware front, Nayi Disha builds on the available resources in the market. The games don’t require heavy hardware configurations. They recommend PC’s with Intel i3 processors and above, 2 GB plus RAM, and a GPU to run the games optimally. So there is no requirement of expense gaming consoles to run these motion based games.

Nayi Disha’s team is also working on bringing the games directly to the market. They did a small experiment in which they uploaded one of their games on the Microsoft Windows Store, and they got some good responses there. Even though the games cater to a niche platform, they were downloaded all around the world. They are also working on bringing the games on Android and other popular formats.

The path ahead looks good for the studios. They are presently working to introduce more games in their arsenal. Also starting next month (January 2015) the company will be beginning classes in the United States. Nayi Disha Studios shows us that if you have an idea and work diligently towards making it a reality, you can achieve great things. We hope to see more such entrepreneurial initiatives from the young minds of India.

If you or someone you know has an engaging initiative such as this, feel free to tip us on our website.

likethis
What's your reaction?
Awesome
0%
Epic
0%
Like
0%
I Want This
0%
Meh
0%
Posted In
Latest, Tech
Tags
interview
interview
About The Author