Xiaomi fans, who were dejected after the ban on the company’s devices, have a reason to smile today. The Xiaomi Redmi 1S went on sale after a gap of nearly a month. The devices were selling faster than hot cakes before the ban was imposed. At 2pm today, the devices were up again for purchase on Flipkart but the virtual stampede by fans to buy the device was missing. The sale went on for over thirty minutes before going out of stock. The Delhi High court had banned the devices after a patent infringement accusation by Ericcson. Ericcson claimed that Xiaomi infringed on eight of its patents that include features like AMR, EDGE and 3G technologies. Xiaomi later appealed to the court saying that it sold Qualcomm chipset based devices, and Qualcomm had obtained the required licenses from Ericsson. This meant that the Xiaomi phones running on Qualcomm chipset did not infringe on the patents of Ericsson. Thus the Delhi High Court raised the ban on the company allowing them to sell Qualcomm chipset based devices. And hence the Redmi 1S with its Snapdragon 400 chipset went on sale today. 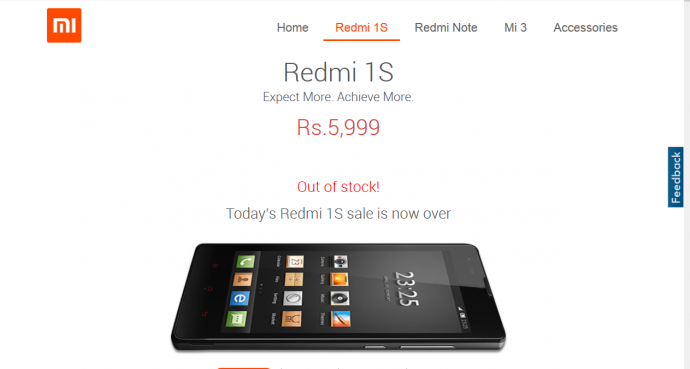 Xiaomi had brought up to 50,000 devices for sale today, which is one of the biggest stocks from the company for a single flash sale. It was a slow sales day at Mi India’s page at Flipkart. During previous sales we saw the devices disappear within seconds but this time around, the window of purchase was open for several minutes before the devices went out of stock.

Xiaomi also said that it will be bringing the 4G variant of the Redmi Note, which runs on a Snapdragon processor to the market. However the date of sale is yet to be specified. We would like to assume that the folks have been saving for the Redmi Note, which carries a bigger display with almost the same specs as the Redmi 1S. The Note also supports 4G so it surely has that advantage over the 1S. But even with a slow sales day, Xiaomi still managed to clear all its stocks which means the love for the company hasn’t ended yet.

If you are one of the many who scored the device, share your joy with us in the comments. We will also keep you updated on the date of sale of the Redmi Note. Keep checking iGyaan for more.