Last year saw some mega hacks attacking some of the most prominent names in the world. First there was the iCloud hack which led to a leak of personal images of Hollywood actresses. Then came the supposed attack from North Korea on Sony Pictures, which did some considerable damage to the production house. But today something even unprecedented happened; social media pages belonging to US Military establishment have gotten hacked by alleged ISIS sympathizers.

The Twitter and YouTube accounts of US Central Command (Centcom) were hijacked by the hackers who claimed allegiance to the Islamic State. They started posting propaganda videos and threatening messages on the websites. The hackers also uploaded some military documents which Centcom claims aren’t confidential and are available on the internet. 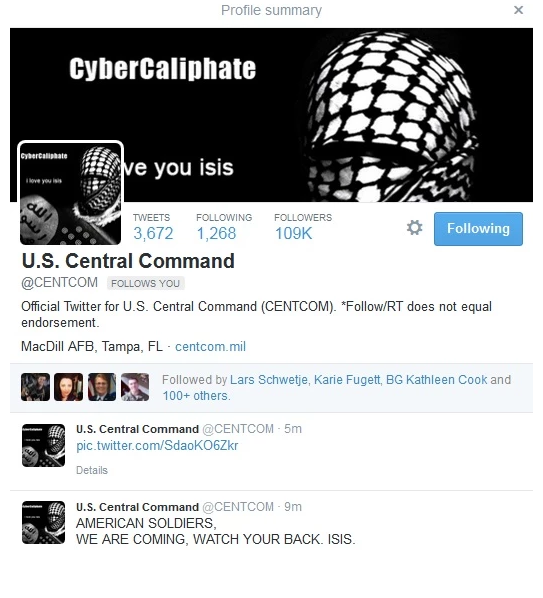 The hackers took over the twitter page and left threatening messages for the US Army.

US Centcom is dedicated to the combat missions undertaken in Iraq, Afghanistan and the rest of the middle east. This is definitely an embarrassing situation for the most powerful military in the world.

Following the information about the hijack, the hacked pages were taken offline but not before the perceptional damage was done. Centcom spokesperson has said that the US military network hasn’t been compromised by the hack, and they see this attack as a case of “cybervandalism.” They also added that none of the documents released by the attackers came from the Centcom’s servers or any other social media website.

After Hijacking the YouTube page the attackers posted propganda videos.

The case is being overseen by the Federal Bureau of Investigation(FBI). The White House also released a statement that said that they are considering the attack seriously and “examining and investigating the extent of the incident.” Several Miltary experts have said that this is an attack on the social media pages and not on the US Military network and hence isn’t a major breach.

The twitter page was taken down for a while and now its back online.

These major releases show that if something is on the internet, it can be stolen with ease. So in these times, just consider any information you have saved on the internet is up for grabs and live in peace with that thought.

Happy Nagashetti
iGyaan Network's newbie Happy is a Technological Hedonist, Traveller, Photographer, Curious Humanoid and a giant foodie who is always pumped up for new adventures.
You Might Also Like
LatestTechTwitterYouTube
Read More