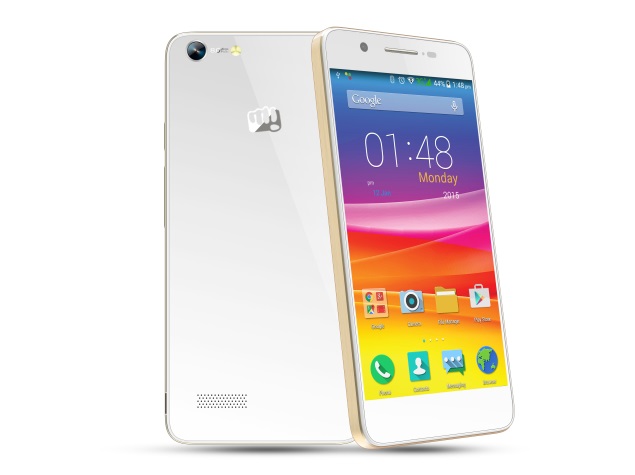 India-based company Micromax is the top choice of many smartphone users. The latest offering by its subsidiary, Yu, recently released a device that houses an exceptional set of specs at a super low price. Now, Micromax has added one more handset to its portfolio, the Canvas Hue. The company claims that the device can last up to 30 days on a single charge, which seems a bit far-fetched if you ask us. As far as the specifications are concerned, Micromax Canvas Hue has a 5-inch HD AMOLED display of 1280×720 pixels resolution. The Corning Gorilla Glass 3 protection prevents the display from breakage and makes it scratch-resistant. The device is powered by a 1.3GHz quad-core processor paired with 1GB of RAM. The handset runs on Android 4.4.4 KitKat as of now, but it is expected to get the Android 5.0 Lollipop update soon.

Talking about the camera specification, the device has an 8MP primary camera along with a 2MP shooter at front. Canvas Hue houses a powerful 3,000mAh battery and has a support for super power saving mode, which extends the battery life of the phone. The handset features a storage capacity of 8 GB, which can be further expanded via MicroSD card.

The Chief Executive Officer of Micromax Vineet Taneja said in a statement:

With an AMOLED HD screen, users are guaranteed of a life-like viewing experience through more vivid colours and a crystal clear display. The Canvas Hue is a perfect blend of premium design, seamless efficiency and superior technology that supports the needs of the ever evolving consumers.

Priced at Rs. 10,999, Canvas Hue will go on sale on 16th January. The device is relatively cheap and can compete with big contenders in the market like Xiaomi Redmi Note 4G, Gionee Marathon M3 and Yu Yureka, which pack somewhat similar set of specs.

likethis
What's your reaction?
Awesome
0%
Epic
0%
Like
0%
I Want This
0%
Meh
0%
Posted In
Latest, Micromax, Mobile
Tags
Micromax
Micromax
About The Author