by Meenakshi RawatFebruary 5, 2015
0
Now Reading
Google Gtalk’s 9-Year-Reign to Come to an End on 16th February
Browse This Page

Google’s IM service Gtalk after 9 fulfilling years will come to an end on 16th February. The internet search giant has decided to push its user base to Hangouts, the new app for chat.

The company is shutting down its Gtalk service on February 16, which will be replaced by Hangouts. Google declared the same via chat saying that Google Talk app for Windows will go non-functional on February 16, 2015 and users can download Hangouts Chrome feature to continue chatting. 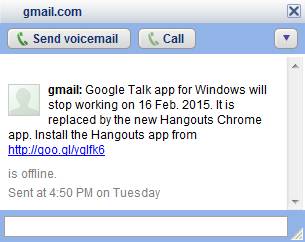 Hangouts is also very user friendly to use and offers many more features with a convenient interface. It shows when the person was last seen, allows to chat with multiple people at a time, allows video calling and packs many more features than the Gtalk.

This move was obvious and Google is not being unfair by taking down Gtalk. The company gave users ample time to get used to it by announcing it on May 2013. Hangouts is the future of Google, but it is also true that Hangouts is not widely accepted. However, one cannot deny that the instant messaging application is the need of the hour as it provides smooth integration between PC, tablet and mobile.