Over the past few months, Microsoft has been leaking images of its two new flagship phones – the Lumia 950 and the Lumia 950 XL. The handsets will be launched on the 6th of October in New York City, along with the Surface Pro 2 and Microsoft Band 2

Now apart from these devices, Microsoft also plans on bringing out a new budget device called the Lumia 550. The Lumia 550 is rumored to have a 5-inch display, 1GHz processor, and 5-megapixel camera. The lumia 550 will look to replace other 5xx models such as the 540. Some slides of what appears to be a Microsoft presentation in Spanish were posted in Forever Nokia Latin America’s Facebook page. The slides reveal a whole bunch of specs and features for the three new Lumia phones. The slides also show that the phones (except the 550) will feature a version of Windows Hello, which is Windows 10’s facial recognition technology.

According to the slides, here are the specs for the Lumia 950 and the Lumia 950 XL. These specs also match the earlier leaks that have been floating around. 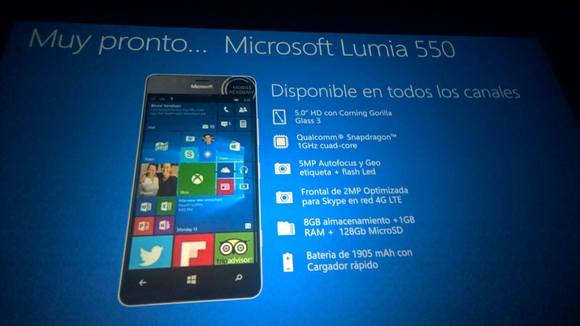 The Lumia 550, on the other hand, reveal specs that suggest the handset will aim at the low-end market. According to the slide, the Lumia 550 is set to have the following features:

Microsoft will also look to incorporate other Windows 10 features such as Cortana, OneDrive cloud storage, and others. No details on the price or release dates of the phones have been revealed yet.