5 ‘Star Wars’ Technologies That May Not Be So Far, Far Away

by Sanket VijayOctober 18, 2015
0
Now Reading
5 ‘Star Wars’ Technologies That May Not Be So Far, Far Away
Browse This Page A long time ago, in a galaxy far, far away, there were droids, space lasers, lightsabers and landspeeders. Of course, we’re talking about the fictional world of the cult sci-fi space opera movie, Star Wars. But how fictional is all that technology – that was seen in the series about 40 years ago – today? Let’s take a look at how close we’ve come to creating some of the technological marvels found in Star Wars.

Landspeeders originally debuted in the original Star Wars series 37 years ago and since then fans around the world have been drooling over the prospect of zipping over the ground in an anti-gravity vehicle. While it might be a while before you see a population of people riding in their own hoverbikes, there is (a new) hope nevertheless. Malloy Aeronotics and Aerofex are two companies among others who have been actively working on trying to make the hoverbike a reality.

Aerofex has been testing its own hoverbikes in the Mojave desert. There has been keen interest in this area with many parties interested in this technology. So it won’t be long before one can see some insane anti-gravity drag-racing, once these hoverbkes are ready. Watch the video of Aerofex testing out the hoverbike below.

Droids are robotic machines possessing artificial intelligence. The term ‘droid’ was popularized by Gearge Lucas in the original Star Wars films, and originated as an abridgment of ‘android’. Droids are seen throughout Star Wars in various shapes and sizes, the most famous ones being R2-D2 and C-3P0. Ever since the classic twosome appeared in Star Wars: A New Hope, people have been waiting for the day droids and robots will become an everyday thing. Technology is progressing along, but it’s just not fast enough. It takes a new Star Wars film for technology to kick it into overgear. The new Star Wars: Force Awakens movie is out in December, but a small 40 seconds trailer that was released a few months ago got the whole world in a frenzied state. Every scene from the teaser was dissected to bits, including one scene which showed a new droid, the BB-8. The little ball of a droid was seen rolling along the desert of Jakku. One never expected any droid to top R2-D2 but fans are adoring BB-8, which is why a company called Sphero has done the deed. Yes, BB-8 is real and it is available on Amazon for $149.

The BB-8 toy can be controlled via mobile app and it is all kinds of awesome. The BB-8 can roll around, listens and responds to your voice, and has a mind of it’s own. Look at the promotional video below and see for yourselves. It’s 2015 and we should be having lasers by now, right? Well, not exactly, but there are people working on it. Lasers are among the top technologies that comes to mind when you think of the ‘future’. That and flying cars, of course. We’re probably a few hundred years away from having fancy lasers like the ones seen in Star Wars with bright colours that zipped by the screen and were trippy as hell. But laser technology today is a fact and while it may not shoot red or blue bolts into the target, they can still burn holes when concentrated on the target long enough.

We’re talking about the Laser Weapons System (LaWS) that is employed by the U.S Navy on a warship, the USS Ponce. The weapon was first tested in 2014 and the United States Navy reported the LaWS system works perfectly. Here’s what it looks like when a ship lasers a drone. Boeing has partnered with NASA and will soon have seats for paying tourists in their CST-100 vehicle, allowing members of the general public to visit the International Space Station along with the astronauts. The price of admission is high and you’ll probably have to wait a couple of decades for fares to reduce once space travelling becomes part of normal human life. Fingers crossed. 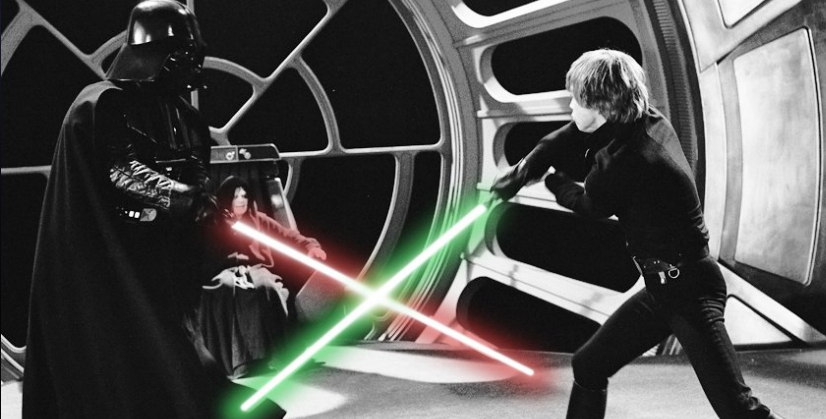 Perhaps the one piece of technology that is truly the star of Star Wars is the lightsaber. That awe-inspiring laser sword is a signature weapon of the Jedi order and the Sith alike. The lightsaber is used for close combat typically between the Jedi and the Sith. The lightsaber’s energy blade can cut, burn and melt through pretty much anything. It can also deflect blaster bolts and other lightsabers as well.

Lightsabers were so loved by film fans around that it was voted the most popular weapon in the film history in a 2008 survey. So naturally, a weapon so admired must be made into a reality. Over the decades, we have seen two groups of scientists who have expressed their opinions on the lightsaber. There are the killjoy scientists who believe that a real-life lightsaber is not scientifically possible. And then there are believers who will do anything to bring this technological work of art to life like the boys from Harvard and MIT back in 2013.

Based on the findings by the team from Harvard and MIT, a group of theoretical physicists from the National Institute of Standards and Technology (NIST) recently discovered a mechanism that can bind photons together in a pseudo-molecule, bringing us a little closer to real-life lightsabers. All right, so that’s Obama with a toy lightsaber. But if he’s excited about the prospect of a real lightsaber in the future then so are we.

Sanket Vijay
When not indulging in reading or writing, Sanket fanboys over The Flash, Star Wars, Coldplay, and U2. And pizza, he loves his pizza. Follow him on Instagram for more.
You Might Also Like
LatestTech
Read More