Xiaomi fans are eagerly anticipating the new flagship smartphone, Mi 5, for a while now. The company has been delaying the launch of the device which was earlier supposed to come out by the end of this year, but will now see an early 2016 launch. This is also due to the new Qualcomm Snapdragon 820 processor due to feature in flagship devices in 2016.

For those who want to know a little more about the upcoming flagship device, we have something for you today. An online retailer’s website, Oppomart, has listed the Xiaomi Mi 5 along with what is quite possibly the confirmed specs of the device. (Update: the device has been taken down from the site) 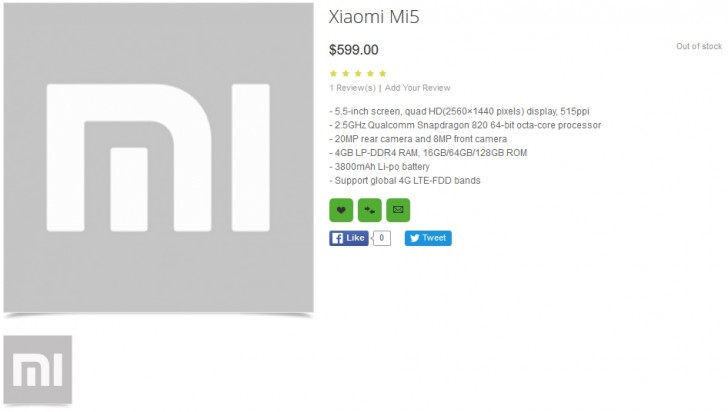 The specifications confirm what have been rumoured about the device including the fact that it will indeed feature Snapdragon 820 processor under the hood. The Mi 5 will sport a 5.5-inch screen with quad HD (2560×1440) display, 20MP primary camera and an 8MP front. The actual look of the device is still a mystery as different sources have revealed different designs. The price listed on the website could differ after the actual launch of the device, but it does look likely that the company will stick to this price tag considering the next-gen specs listed. We’ll know more as we reach closer to the launch of the Xiaomi Mi 5.