There is no stopping the leaks of the Samsung Galaxy Note 7, with the company now confirming the August 2nd Launch date officially on their twitter handles, it seems that we will not be expecting a major new device, as the world will already know the handset.

Your next big idea is right around the corner. Tune in to #Unpacked live on August 2. pic.twitter.com/H7gDH73gdR

The latest leak shows off the iris scanner unlock system on the lock screen. which shows two circles above the usual pattern lock. The image comes via @stagueve and it is the most up-close look you should get with the Galaxy Note 7 and its iris scanner prior to launch. 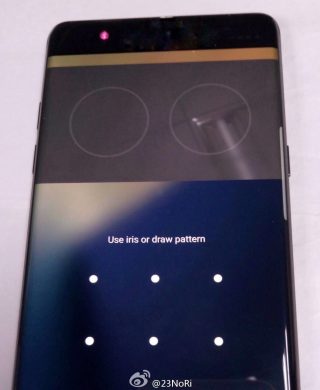 Spec wise the Note 7 is supposedly going to launch in two variants  a  Qualcomm Snapdragon 820 processor with Adreno 530 GPU, another variant with Exynos 7420 processor was also leaked. The Note 7 will also carry a maximum 4 GB of RAM as opposed to the expected 6 GB previously leaked.

In an internal memo obtained by iGyaan, the Note 7 is also expected to have two new features to in the Air View menu, along with a confirmation of the Iris scanner and a border-less display expected to be the Edge Display.