More leaks emerge this Wednesday with the next in line Sony flagship posing for pictures. The phone will feature a flatter approach to design, much like original Sony Xperia Z phones. The hardware was leaked on benchmarks a while back and the F8331 is expected to launch at IFA in berlin. The back gets a new design as well with a clear separation for the bottom plate and a single line camera layout with dual led flash. The phone will now sport a USB Type C port and will also have a 3.5mm headphone jack. Supposedly running on the Qualcomm Snapdragon 820 chipset with a 5.1 inch full HD display . 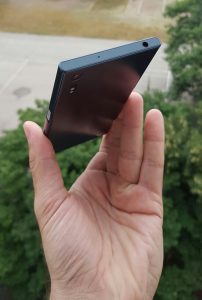 The Sony Xperia F8331 is also expected to have 4k Video capture and OIS on both rear and front cameras. Deviana
Mobile phone lover, Deviana, is iGyaan's Mobile news correspondent
You Might Also Like
LatestMobileSonyTop Around the Web
Read More