Full Specs Of The OnePlus 7 Pro Leak Ahead Of Launch

by Sahil KapoorMay 9, 2019
0
Now Reading
Full Specs Of The OnePlus 7 Pro Leak Ahead Of Launch
Browse This Page OnePlus is gearing up for the launch of its latest smartphones which will succeed the OnePlus 6T from 2018. The upcoming devices include the OnePlus 7 and its beefed up elder sibling the OnePlus 7 Pro. Previously, the renders of both the handsets were leaked which revealed their design. Now, the specifications of the high end OnePlus 7 Pro have leaked ahead of its official announcement which is set for the 14th of May. 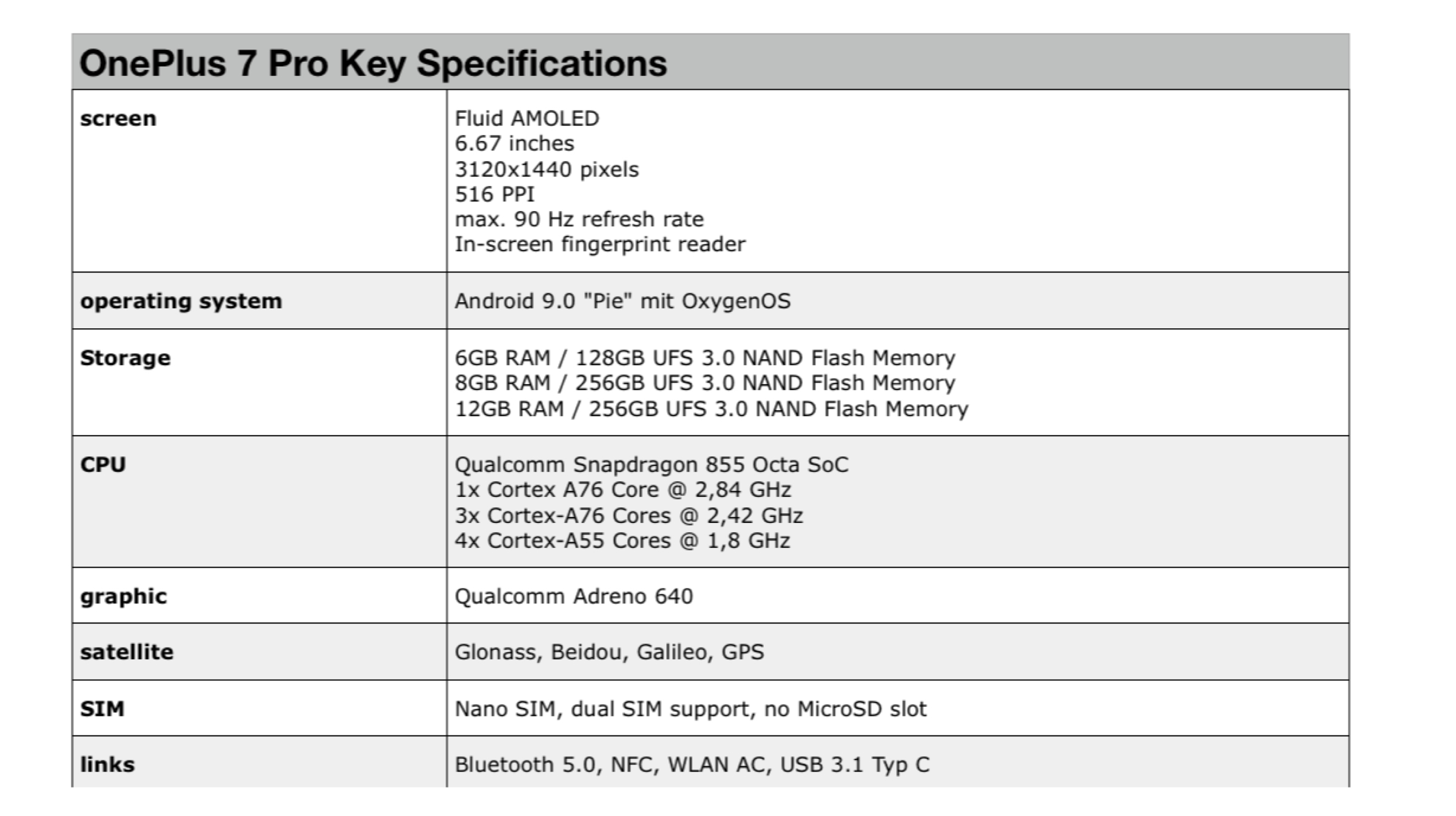 According to the leak, the highly anticipated OnePlus 7 Pro sports a 6.67 inch Fluid AMOLED display. The panel has a resolution of 3120 x 1440 px and a pixel density of 516 ppi. Noteworthy, the OnePlus 7 Pro has a 90 Hz refresh rate display which provides for enhanced viewing experience. The smartphone runs on OxygenOS which is based on the latest Android 9 Pie.  As previously confirmed, the flagship smartphone packs UFS 3.0 storage and will be available in three storage variants which include 6 GB + 128 GB,  8 GB + 256 GB and 12 GB + 256 GB. Under the hood, the OnePlus 7 Pro will be kitted with the Snapdragon 855 SoC which is manufactured using 7 nm fabrication process. The same chipset is also present on devices like the Xiaomi Black Shark 2 and the Lenovo Z6 Pro GT. The chipset consists of the Adreno 640 GPU and eight CPU cores. Out of the eight cores, one Cortex A76 core is clocked at 2.84 GHz, three Cortex A76 cores are clocked at 2.42 GHz, while the remaining Cortex A55 cores are clocked at 1.8 GHz. In terms of connectivity, the OnePlus 7 Pro has Bluetooth 5.0, 802.11 Wi-Fi, USB 3.1 Type C Port and NFC. Unlike any other OnePlus device in the past, the upcoming OnePlus 7 Pro has stereo speakers which will provide for an enriched media consumption experience. The handset will be powered by a 4,000 mAh battery that supports 30W warp charge. The said fast charging technology was first introduced with the OnePlus 6T McLaren Edition which was launched last year. The smartphone measures 162.6 x 75.9 x 8.8 mm and weighs in at 210 grams. As previously mentioned, the OnePlus 7 Pro will be available in three storage variants. With the new device, the company will also introduce new colour options. The European pricing for different variants of the device are as follows: Conclusively, the launch date of both the smartphones is nearing fast and detailed information will be revealed then.