LG hasn’t been shy when it comes to teasing its upcoming flagship G2. We’ve seen LG drop the ‘Optimus’ name from its marketing, unload various teaser videos, and even announce official cases. In addition, a plethora of leaked images and hands-on videos revealed its design and unique features – mainly the back volume buttons.

A new post on Nowhereelse, by the way of a user manual, confirms previous rumours and a few missing specs of the LG G2 :

The manual appears to be legit and reveals the phone will be using the nano-SIM standard like the Motorola Moto X and the iPhone 5. This leak also gives confirmation of the 2610 mAh battery, which will also be user-removable. The LG G2 will officially be unveiled in New York on Wednesday, August 7th and we’ll bring you all the details. 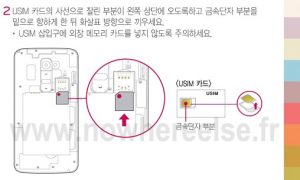