Nokia 220 and Asha 230 Launched, Adding to Its Vast Range of Feature Phones

by Preetish GumberFebruary 24, 2014
0
Now Reading
Nokia 220 and Asha 230 Launched, Adding to Its Vast Range of Feature Phones
Browse This Page After the launch of Android Smartphones from Nokia, if you are still interested in feature phones the company will not disappoint you. As Nokia 220 and Asha 230 were also launched besides of the new X family from Nokia.

The Nokia 220 features a 2.4 inch QVGA LCD display and  sports a 2 MP. This feature phone supports expandable storage up to 32 GB via microSD card. Has Bluetooth and supports Micro USB. Available in single or dual-SIM versions, users can take advantage of the pre-loaded Twitter and Facebook applications. The company proudly says that the new Nokia 220 has been built after seeing the success of the Nokia 110 budget phone.

On the other hand, the Asha 203 features the Fastlane UI, which is seen on Asha devices and now also on the X family. The phone comes preloaded with apps such as WhatsApp, Facebook, Twitter, LINE and WeChat. Keeping the name of Asha phones it will be available in Red, Green, Black, Cyan, White, and Yellow. 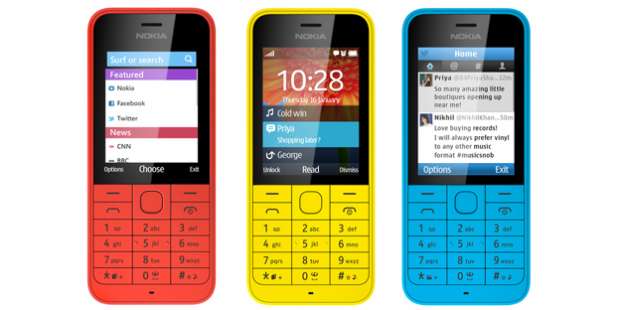 The Nokia 220 feature phone is priced at 29 euros and the Nokia Asha 230 has been priced at 45 euros. More information to be out soon.