Some people say print is dead. With pendrives and cloud sharing, printing documents and pictures seems unnecessary. But what if you could carry a printer in your pocket or you bag. Wouldn’t that be awesome? 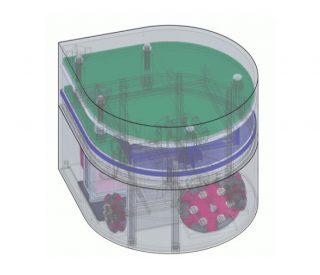 ZUtA Pocket Printer is a simple, softball sized and is compatible with any electronic device and can be used anywhere, anytime. The idea was born when a team of students in Jerusalem College of Technology got together to add some innovation to the printing industry. As students they finishes assignments in library’s, trains, parks, and cafes. Once their work was done, they always had a hard time finding a place to print. Hence, they came up with the idea of  this portable printer.

Since it doesn’t necessitate any special drivers, it can be accessed via computers, smart phones or tablets, by using the traditional print function or an app. It will work with paper of any size and will print roughly 1,000 sheets of paper on a standard, disposable ink cartridge. The printer will last for up to an hour on full battery and can be recharged via a USB cable.

Its teardrop design allow users to line it up with the angle of the paper to make sure their documents come out straight. It then rolls athwart the blank sheet on small, multi-directional wheels while ejecting ink. The printer is intended not only for smaller documents, such as tickets or notes from a meeting, but also for larger documents with multiple pages. It will be designed to wait for the user to place it on a new sheet of paper before continuing the job. An average page of text will be able to print in approximately 40-45 second.

The design for the ZUtA Pocket Printer was stimulated by private inevitability. Elbaum, co-founder of ZUtA Labs, said that as an entrepreneur he has often found himself functioning on the go and it befuddled him that, given everything else we can do, we still can’t print from mobile devices. Other devices advertised as portable are constrained to the size of the paper they use, which means that they can’t be nearly as mobile as the ZUtA product.

The Kickstarter campaign for the ZUtA Pocket Printer has been widely successful. It has raised more than $450,000 out of a $400,000 goal with 12 days still on the clock. The device, which will retail for about $240, is expected to go to production in September and be shipped to Kickstarter backers in January.

Parul Ritvik Sood
iGyaan Network's newbie, Parul is a Writer, Poet, Reader and Mass Communication Graduate with great interest in startups and entrepreneurship.
You Might Also Like
DesignGadgetiGyaanLatest
Read More