The slimmest LTE phone in the world weighs around 148 grams and is 7mm thick. It will be competing with Gionee Elife S5.5 which is the slimmest phone available in the market at just 5.5mm thickness.

The Sony Xperia T3 has IPS-LCD Triluminos screen with 720×1280 pixels resolution. It is powered by a 1.4 GHz quad-core Qualcomm Snapdragon 400 (MSM8228) processor and runs on Android 4.4 KitKat. It comes with a 8-megapixel rear camera with Sony Exmor RS sensor, LED flash and 1080p video recording. It has a  1.1-megapixel HD front-facing camera. The framework is made by following the customary OmniBalance design with a metal frame that is uncovered on the sides. The back is a lusterless plastic available in three colors: white, black or purple. The Sony Xperia T3 has affluent connectivity options for a mid-range device, starting with the usual 2G/3G, LTE Cat. 4 for up to 150Mbps download speeds, Wi-Fi with Miracast and DLNA, Bluetooth 4.0, NFC and A-GPS.

The relatively small 2,500mAh battery promises up to almost 13 hours of talking, plus there’s Stamina mode to reduce power usage when you need more out of the battery. Sony has announced that the device will be launched globally in the end of July. The price has not been announced yet. 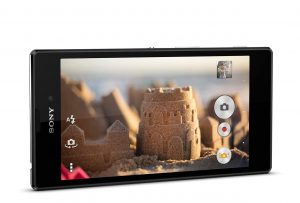