Xiaomi Becomes the Fifth-Largest Smartphone Vendor in the World The year 2014 is definitely proving to be a great year for the “Apple of China”. Yes, Xiaomi Inc has overtaken LG to claim the fifth spot in overall smartphones shipped in the second quarter of 2014. The company, barely four years old, was labeled as the ‘star performer’ for the quarter by Strategy Analytics.

The market research firm today reported that Xiaomi captured a record 5.1% market share, up from a meagre 1.8% it captured last year. In physical numbers, the company showed a sharp growth. Xiaomi shipped an incredible 15.1 million units in the second quarter of 2014, as compared to only 4.1 million units shipped in the same quarter in the previous year. This incredible growth now puts it above LG and into the top five smartphone vendors for the first time in the company’s history. 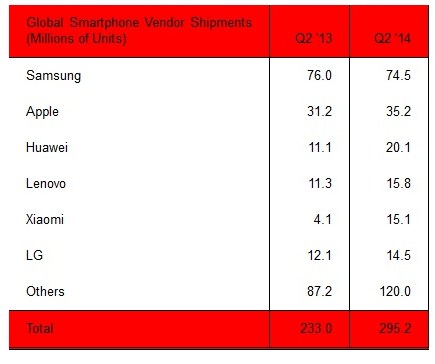 This is largely due to its very competitively priced and high specs laden smartphones selling like hot cakes in developing markets. We recently published news of their Mi3 flagship phone selling out on Flipkart in less than 5 minutes. Even their latest smartphone, the Mi4, is being sold in China for only 1999 yuan (about Rs. 20,000), less than half the price of Apple’s iPhone 5s.

“Xiaomi’s Android smartphone models are wildly popular in the Chinese market and it shifts millions of them every quarter through its extensive online and operator channels,” says Strategy Analytics. “Their next step is to target the international market in Asia and Europe, where it will have to invest big money to familiarize western consumers with its unfamiliar brand name.”

Overall, the market continues to be dominated by Samsung and Apple, although their lead keeps on diminishing. Total smartphones shipped for the quarter stood at 295.2 million units, up from the 233 million units in 2013. Out of these, Samsung accounted for 74.5 million units, which surprisingly, was a fall from 76 million units it shipped in the same quarter in the previous year. Their market share also declined sharply from 32.6% last year to 25.2% this year. Samsung in a recent statement blamed cheaper Chinese competitors for this decline. Apple continued to hold the distant second position with 11.9% market share, again a decline from the 13.4% share it held last year. Physical units shipped by them however, rose from 31.2 million units to 35.2 million units.

Korean giants LG, despite an increase in shipments, saw a decline in market share from 5.2% to 4.9%. “LG is performing relatively well in the United States and Europe, but it continues to lag in the huge China and India markets,” Strategy Analytics said. The third and fourth positions continued to be held by Chinese manufacturers Huawei and Lenovo, both of which saw an increase in units shipped and market share.