Google has come a long way in a short period of time. From a simple search engine to a global multinational conglomerate, it is now a brand that the entire world recognizes. Google’s IPO marks its ten year anniversary today.

The company’s humble beginnings and meteoric rise has been written about in countless media spaces. Their initial product was the internet service which archived the webpages and made their discovery super easy. It helped Google to become the cornerstone of the internet. It wouldn’t be wrong, neither would it be an exaggeration, to say that Google is now the gateway to the internet. But surprisingly this tech giant’s Initial Public Offering (IPO) back in 2004 saw pretty much the same response from the financial market that the Facebook IPO would face a few years later. 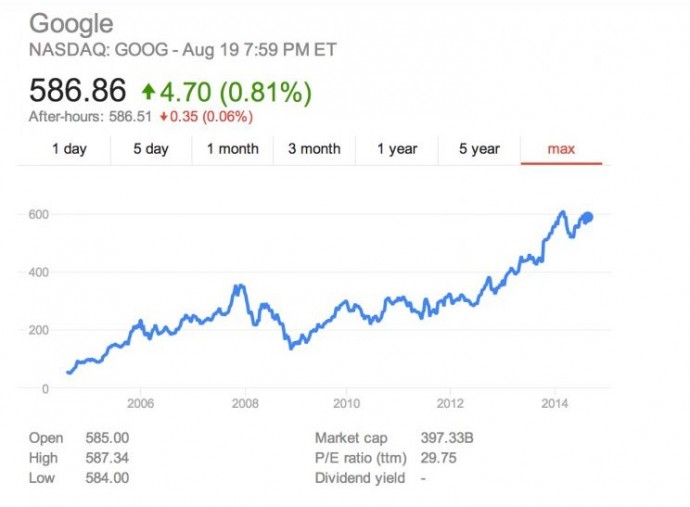 The folks at Google had originally estimated price range of $108-$135 per share but ultimately ended up with $85 per share price for their 19.6 million shares offering. Many industry watchers believed that Google was a fad and just the way Google replaced Yahoo, someone else would come replace Google too. Google apparently had better ideas for its future prospects than the market experts.

Since that time, Google’s graph has gone nowhere but up apart from, of course, the financial meltdown of 2008. Its stock has grown by 1293% in the ten years of its existence. Though it is a huge leap for the company, its courtroom and market adversary Apple has grown 4274% in the same period, thanks to the little devices called iPod and iPhone along with its other products.

Google now has its arms in almost all fields of technology. From Email services, to Operating systems and of course being the industry leaders in the smartphone business. Along with these, the company also is actively interested in and invests in real world infrastructural innovation. From robots to self-driving cars, Google intends to create the technology-aided future of tomorrow.

The company now has an audacious plan of bringing in High speed internet connectivity to the burgeoning markets of Asia. This will further create a bigger market that consumes Google products, thereby a sure-shot profitable investment. So if you are buying a Google IPO now, that is if you can afford one, you can be sure that your money is efficiently working for you.

likethis
What's your reaction?
Awesome
0%
Epic
0%
Like
0%
I Want This
0%
Meh
0%
Posted In
Business, Google, Latest, Top Around the Web
Tags
About The Author

Happy Nagashetti
iGyaan Network's newbie Happy is a Technological Hedonist, Traveller, Photographer, Curious Humanoid and a giant foodie who is always pumped up for new adventures.
You Might Also Like
BusinessGoogleLatestTop Around the Web
Read More