Motorola recently came up with their latest generation of smartphones, the Moto X (Gen 2) and the Moto G (Gen 2). Moto G (Gen 2) is already available in the market for Rs. 12,999, but we had been waiting to get our hands on the new gen Moto X.

Well the wait is over, the company today has revealed the pricing of the Moto X (Gen 2) through their Motorola India Twitter handle. The new handset will be available exclusively on Flipkart from midnight today starting at the price of Rs. Rs. 31,999.

The new Moto X is not much bigger than the previous one, with a 5.2 inch AMOLED display. It is still protected by Gorilla Glass. It is about 0.5 inch wider than last year’s X. However, the refreshed model sports a 1080p full HD display instead of a 720p one.

The screen takes almost all the space on the front, leaving the bare minimum for bezels.  It measures 72.4mm wide by 140.8mm tall and weighs 144 grams. To give the device a premium feel, the company has added a smooth piece of aluminium wrapping the entire edge of the phone.

At the back, it has an updated 13-megapixel camera lens with 4x zoom and a ring flash. The camera has the ability to capture 4K video instead of just 1080p and it’s also got a new feature called Best Shot. As far as the hardware is concerned you won’t be disappointed. The device runs on  a Qualcomm Snapdragon 801 processor with a 2.5GHz quad-core CPU, an Adreno 330 578MHz GPU and 2GB of RAM. It is powered by 2,300 mAh battery which Motorola claims will last a full day.  The new Moto X has four microphones to help reduce background noise, and comes in a “splash guard” water repellent coating  and will be available in both 16GB and 32GB variants.

One the software side, new Moto X comes with hand full of softwares, same as the older Moto X, including Migration tool and some others like Touchless Control, Active Display and Motorola Assist have been renamed in the new Moto X as Moto Actions, Moto Display and Moto Assist respectively. Another great iteration in the new Moto X is that instead of ‘OK Google’  as a voice prompt, you can customize the voice command prompt to anything you like. 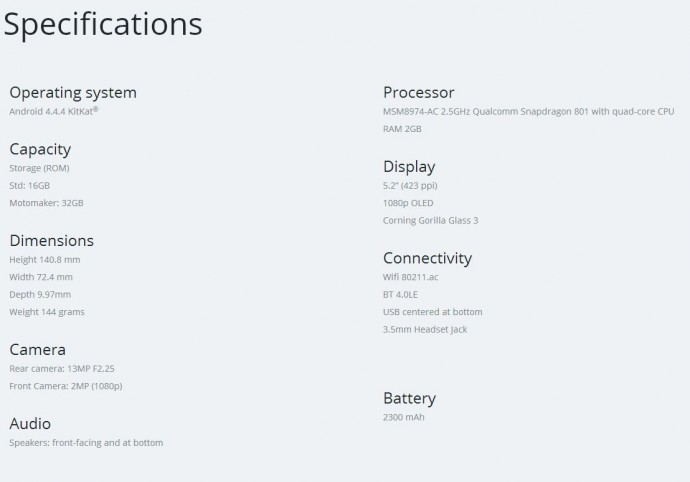