India is the official king of jugaad (innovative fixes). The country made the cheapest mars mission ever; it costs less than the budget of the movie Gravity. The best part, it made its way to mars in the first attempt. The Mars Orbiter Mission (MOM) aka Mangalyaan now is the crowning glory of the Indian Space Research Organisation (ISRO).

Established in 1969, ISRO works under the Department of Space, Government of India. It was entrusted with the responsibility of using space science for the betterment of the country. ISRO has tremendous achievements under its belt; from launching satellites for other nations to being one of the few nations to send a mission to the moon and now to Mars, ISRO has exhibited a feat unlike anyone in the developing nations except China. The spacecraft was launched on 5th November 2013

Information about the status of MOM mission was proactively posted on social media and led to a great interest in the mission from the world over. This spacecraft was significant not only because of the low success rate for Mars missions, but also because it was a great feat by a developing economy.

The spacecraft made the 680 million km in under a year. The star of the show is a 1,350kg unmanned robotic satellite about the size of a nano. Its task is to map the red planet for methane, which can help to find the existence of life on the planet. It is equipped with the Mars Colour Camera which will capture images and information about the surface features and composition of Mars.

The Mission achieved its elliptical orbit spanning 423 km X 80,000 km around Mars. At 8.10 AM it was confirmed that MOM has achieved orbital insertion with the engine imparting the required thrust of 1098 metres/second during its 24-minute burst. This led to massive celebrations at the mission control. The mission was launched on 5 November 2013 using a PSLV rocket, and it took over 300 days for the mission to reach Mars. The total cost of the mission was Rs. 450 crores or about $74m. The costs include Rs.125 crores (US$21 million) of required studies of the orbiter and the cost of satellite, that is Rs. 153 crores (US$25 million). The mission was announced on 3rd August 2012 former Prime Minister Dr Manmohan Singh and was ready for launch just 15 months later. The mission utilized more than 500 engineers and scientists.

Following the success of the mission, Prime Minister Narendra Modi said “We have gone beyond the boundaries of human enterprise and innovation. If our national cricket team wins a tournament the whole country celebrates. What our scientists have done is far greater.” It is indeed a great feat. With the success of the Mangalyaan mission, India joins the elite league of a handful of countries who have made their way to the fourth rock from the sun. It is also the only country to have a successful mission to mars in the first try where the success rate stands at just 42%.

The mission was basically a test of ISRO’s capabilities for interplanetary missions. Dr. S Radhakrishnan, the Chairman of ISRO called it “technology demonstrator.” ISRO is the highest rated organization for real world applications of its missions as it’s a people oriented organization.

This is just the beginning of India’s space adventures. Soon ISRO plans to launch the Geosynchronous Satellite Launch Vehicle Mark III (GSLV Mark III) which is the heaviest rocket in its arsenal weighing at about 630 tonnes. It will also carry a dummy astronaut module with it. By sending astronauts to space, India can be on the path to match up to China, which currently is setting up the Tiangong space station that will become operational in 2023. ISRO also plans to send a follow-up mission with a greater scientific payload to Mars in the 2017-2020 timeframe

Space missions are extremely important, especially for growing economies. They provide an aspirational frontier that invigorates a whole new generation to achieve the next step in the evolution of humanity. Space sciences tell us a lot about who we are and where we came from. It requires the collaboration of smart brains from varied fields of research and is a celebration of human intellect that has been gained through millennia’s of curiosity. 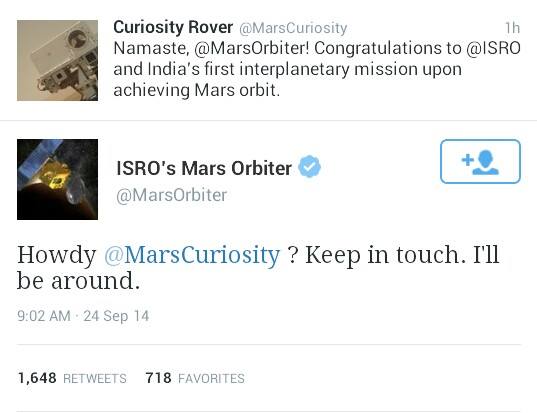 Looks like Mangalyaan already made a friend on arrival at Mars

We heartily congratulate the Indian Space Research Organization for taking this great step for the entire developing world. They have proved that crossing frontiers doesn’t require huge pockets but right intentions and firm determination. Today is a good day.