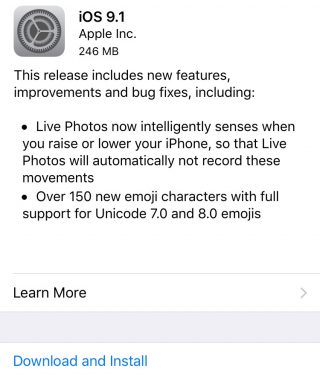 The first is related to Live Photos. Live Photos will now be able to sense when you move your hand higher or lower, and will ignore the movements.

The second new feature is a lot more exciting. The latest updates brings over 150 new emoji characters which include taco, burrito, cheese wedge, money eyes, and the middle finger. Yes, you read that right. There is now an emoji that lets you send a middle finger to anyone if you find yourself unable to express your feelings through the word.

There is a catch, though. The new emojis can be sent only to those who have updated to the iOS 9.1. So, non-iOS users and iOS users still on the older version will not know when you’re giving them the finger. Some would say there is a certain evil joy in that too. Apart from these changes, iOS 9.1 includes new features and compatibility updates for upcoming Apple products like the fourth-generation Apple TV and the iPad Pro. The new Apple TV requires iOS 9.1 for setting up. The new update also fixes a lot of bugs such as unresponsive Calendar, issues with Game Center and some issues with Mail search, among other things.

In case you haven’t already updated your iPhone to the new iOS 9.1 update, you can do so now. For those who don’t know how to get it done, simply head over to Setting > General > Software Updates and hit on ‘Download and Install’. You can also connect your device to the computer and update via iTunes. Once installed, play around with all the new emojis and show some love to your friends by sending them the finger.