What a Thinner iPhone Could Mean for You: Pros and Cons

by Rosheena ZehraDecember 2, 2015
6
Now Reading
What a Thinner iPhone Could Mean for You: Pros and Cons
Browse This Page

Apple has been obsessed with making its iPhones thinner for a while now and has consciously and noticeably worked on reducing the thickness of its devices in the past. However, it may have not always ended too well for the company -Bendgate definitely not being the highlight of Apple’s history. 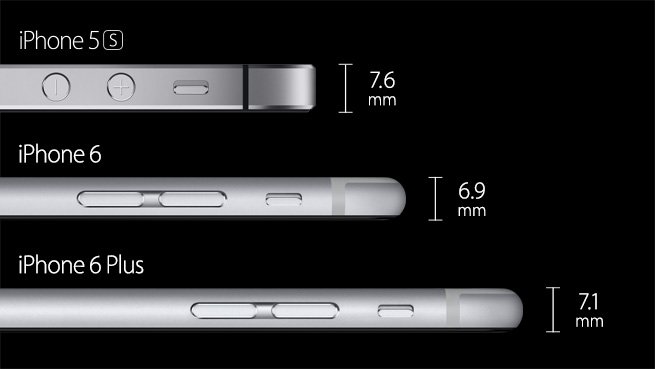 Though the iPhone 6s and 6s Plus were thicker than their predecessors at a 7.1 mm and a 7.3 mm, iPhone 7 is rumoured to be slimmest iPhones so far. Since speculations about this new Apple device have already begun,let’s see what this could mean for the user.

No Ear-Phone Port:
If rumours are to be believed, Apple is planning to get rid of the earphone jack to make the iPhone 7 thinner than any of its predecessors. This move is part of Apple’s patent which aims to make the new device waterproof by getting rid of the port, thereby reducing the number of potential entrances of moisture and liquids for the device. Voila! Say hello to a waterproof iPhone (or at least one less exposed to damage by liquids), boys and girls.

Consequently, the device will probably need to have one common adapter that makes all earphones compatible with it. Additionally, Apple could also include a standard pair of earphones that could be used with the help of a connection to a Lightening conductor. Even if the device requires third-party adapters, they will be available at a fairly affordable price. Bluetooth can also be used as a replacement for earphones. Convenient Size:
A thinner iPhone would definitely be easier to carry around. In all likelihood, it will weigh less than the 143 gms of the iPhone 6s and the 192 gms of iPhone 6s Plus, and thus would be lighter and more portable for the user.

Also, the current iPhones -6s and 6s Plus- have a thickness of 7.1 mm and 7.3 mm respectively. With its latest devices, Apple has come a long way from Bendgate. None of that was witnessed this year as the devices seems sturdy and hardy, in addition to being water-resistant. Time to rejoice, Apple fans and loyalists.

Yes, the Ear-Phone Port:
Users would have to use Bluetooth or the Lightning connector instead of the earphone port. A Lightning cable or a 3.5 mm-to-Lightning adapter would have to be provided by third-party sellers in order to ensure compatibility with iPhone 7. These third-party sellers and their products, the hassle of extra accessories, or the need to use adapters -all of it will make things more complicated for users. Apple is expected to take care of earpods that would connect to the Lightning port and launch accessories specific to the iPhone 7 and its absence of  an earphone port. Needless to say -if this happens, be prepared to burn a whole in your pocket for a pure and authentic iPhone 7 experience.

Might be Sturdier, But Not Comfortable:
A thinner iPhone will not be very comfortable in the hand. The device will not provide a firm grip to the user if made too thin. The attempt of making the device sleek and stylish will completely backfire if it keeps slipping out of the hands. As sturdy as it might be, it will still be an iPhone. Apple would also have to notch-up the speaker quality to ensure a decent over-all sound experience for iPhone 7. Instead of getting rid of the ear-phone jack, the company can instead tone down its paranoia of being repetitive with design, and let go of their obsession of making tech breakthroughs with a new iPhone every year. But if that happens, Apple would perhaps cease to be Apple.