App A Day : TRANSFORMERS: DARK OF THE MOON for iPhone, iPad and iPod Touch

by Bharat NagpalJuly 2, 2011
0
Now Reading
App A Day : TRANSFORMERS: DARK OF THE MOON for iPhone, iPad and iPod Touch
Browse This Page 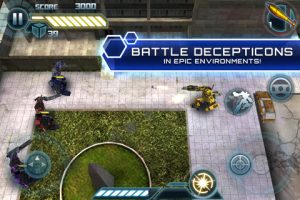 Just as the movie releases the Game for iOS is out by EA and it delivers 13 levels of non-stop action spread across various settings, from cities like Chernobyl and Atlantic City to the Moon. Just like in the movies, the Autobots can transform between robots and vehicles.

The fight is basically between the Transformers and Decepticons You may unlock up to 13 weapons, each of which may be upgraded using blue energon cubes that you’ll be collecting as you roam about. In this same manner, you can also upgrade your character’s skills. All these upgrades may be performed between levels in the lab. In addition to the weapons, you have two types of special attacks, including one that allows you to lock onto multiple targets. You can also attack the Decepticons at close range with a melee attack button.

Although there is a lot of fighting and action involved, it just seems like the same thing over and over again. The game gets really repetitive and feels like a drag after some time.

The lack of a better storyline fails to impress us with this game.