by DevianaNovember 1, 2016
8
Now Reading
The iPhone of the Future Could Fold According to Apple’s Latest Patent
Browse This Page Apple has just been awarded a patent for anew device which the patent application defines as an iPhone. According to the patent  Apple is researching foldable iPhone designs starting from back in 2013. This patent was filed in August and awarded today shows a new design iPhone which will look identical to the current iPhone when folded, but will unfold into a larger display device.

The patent application uses the words “carbon nanotubes” to define the mechanism that will hold the bendy iPhone together.

The application also mentions that the structure may have a hinge or a bendable joint. The iPhone of the patent may never come into play or could simply be the next iPhone of 2017. 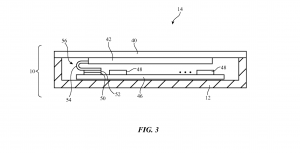 Samsung too has been showing off bendable screens for a while and did showcase a bendable screen last year that could potentially become a smartphone of the future. Samsung patents range from various devices to various display and bend technology types and can be seen here.