by Vipul VijOctober 27, 2017
0
Now Reading
WhatsApp Is Rolling Out The Delete For Everyone (Recall) Feature For All Users
Browse This Page After months of being in beta testing, it appears that WhatsApp is finally happy with its recall feature. WABetainfo now reports that the new feature called ‘Delete for Everyone’, has started rolling out to some Android, iPhone, and Windows Phone users. It only works if both the recipient and sender have the latest version of WhatsApp installed and it also works on WhatsApp Web version.

The website notes that the rollout is slow and may take some time to reach out to all the users. The feature is said to work for all kinds of message like texts, images, videos, GIFs, voice messages, contact, files, location, quoted message, and status replies on WhatsApp. 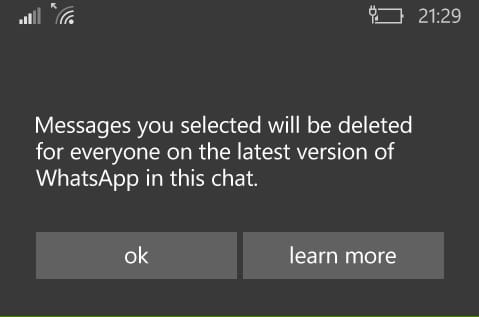 It is worth noting that the feature works only within 7 minutes of sending the message, after that, the message can’t be recalled. Deleted messages will be replaced by “This message was deleted for everyone.” Once the sent message is deleted by the sender, WhatsApp will remove the message from the chat page as well as from the notifications window.

One of the most widely requested feature on the most successful instant messaging apps is finally rolling out to all the users. Because the roll out will happen in phases, don’t get anxious if you haven’t received the update yet.