If you think the Surface tablet’s Touch Cover and Type Cover are cool, then take a look at what Apple has in the works. The company that’s dominating the tablet industry with the iPad is looking to patent what appears to be next-generation Smart Covers, complete with built-in, flexible AMOLED displays, keyboards, and even solar panels and radio frequency (RF) energy collection antennas.

Apple’s patent application for a “Cover Attachment With Flexible Display,” was published by the United States Patent and Trademark Office Thursday, and shows a number of possible Smart Cover embodiments, one of which should look particularly familiar to Microsoft watchers.

When Microsoft first showed off its Surface tablet in June, it spent a significant amount of time touting the benefits of the peripheral Touch Cover, a tablet cover with a flat, built-in keyboard. It was a key features etting the Surface apart from the iPad. But it looks like Apple has been thinking along the same lines for at least a year — the company first filed its patent on Aug. 11, 2011 — and has come up with a flexible Smart Cover that includes a fabric keyboard and potential video or document controls on a back flap.

“First, this configuration gives the user an experience much closer to the one enjoyed by laptop users. Second, by allowing the user to easily view the screen and by providing a convenient surface to type on, tasks such as word processing and email become much more efficient,” the patent document states.

This sounds a lot like what Microsoft said about its Touch Cover advantages, but Apple is envisioning much more (though whether any of Apple’s ideas ever reach fruition is a different matter entirely).

One of the most interesting embodiments in the patent is a Smart Cover with a built-in AMOLED display made of a thin, polyimide substrate that could extend the iPad’s display. The cover would connect to the tablet through a wireless or wired data connection, or could even via other ports such as DisplayPort, mini DisplayPort, DVI, or Thunderbolt. 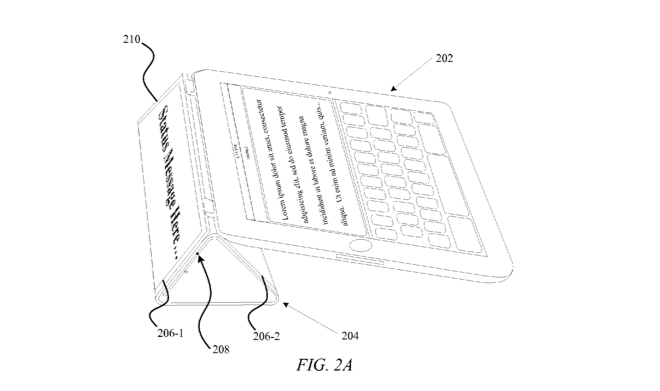 “The addition of cover display ameliorates the limited screen area problem and makes a number of tasks significantly easier, in some cases functioning as an extended desktop,” the patent states. It goes on to list a few examples of how the cover display could help with reviewing multiple documents at once. I imagine the scheme might also be helpful for general multitasking — you could keep your e-mail on the cover display and your web browser on the iPad display. The patent adds that the cover’s display could be enhanced with multi-touch gestures.

Since the cover’s display is flexible and can be used as an iPad stand (just like the current Smart Cover), the patent says that the cover could also recognize when it’s being bent back (with the help of an accelerometer) and activate itself for a specific purpose. For example, the cover display’s panel might display your Facebook status or latest tweet, the current time, or even your name — useful for when in meetings with strangers.

The display doesn’t have to stay within the confines of the tablet. Apple’s filings also describe another option in which the cover features small displays across the outside panels, allowing you to view information without having to open the cover and turn on the tablet. Instead of AMOLED display technology, the patent describes this embodiment as using electronic paper, which requires no extra power to maintain static images or text. The cover, in this case, could be used to display calendar reminders, tasks, or decorative patterns. 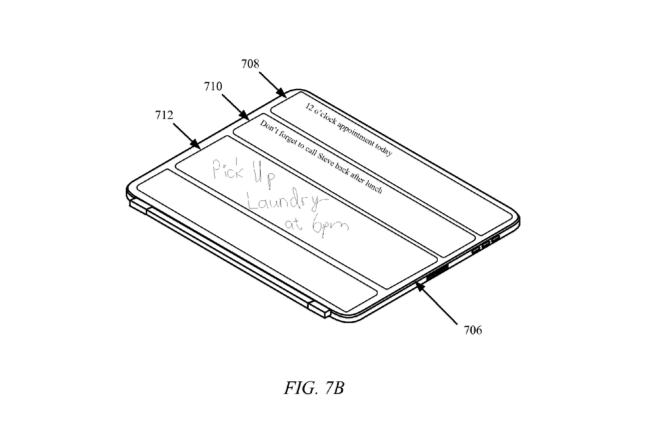 How does the cover display get power? Apple has thought of a few options. The patent document describes a custom MagSafe connector that would allow the cover to draw power from the iPad itself. Alternatively, the cover could include a small battery, so that it doesn’t drain the tablet’s power. Another interesting option is to include “ambient energy collectors” such as solar panels and RF antennas.

In one embodiment, the iPad cover has integrated solar panels on the outside of the cover. In this case, the cover doesn’t only power itself, but it could also transfer energy to the tablet. The cover could also include RF antennas, which the filings admit do not yield as much energy. Still, the antennas could power a micro battery or a super capacitor inside the actual cover, to power the low-energy AMOLED or electronic paper display. One advantage of the RF antennas is that they can collect energy whether the cover is open or closed, whereas the solar panels have to face a light source.

It’s clear that Apple has covered a lot of Smart Cover ground with this patent. It would be amazing to see all of these become actual shipping product features, available for various kinds of user needs. But knowing how Apple functions, it’s more likely that they will come out with one or two options. And if the company is smart, we’ll see a new cover with a built-in keyboard — to ensure nobody opts for a Microsoft Surface just because of the available Touch Cover. 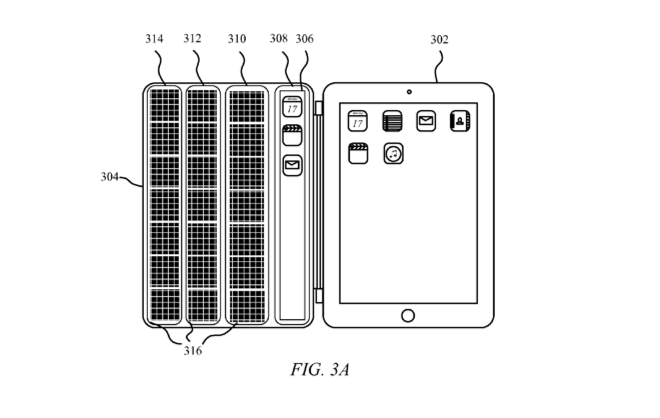