by Shivaank RanaSeptember 9, 2013
2
Now Reading
Nokia Lumia 1520 Poses Next To The Xperia Z In New Leak
Browse This Page Nokia’s entrance into the phablet space is fast approaching and the Lumia 1520 has already leaked out a couple times – once in the form of a press render and the other a blurry picture. A new round of clear images has arrived online and shows the 6-inch Windows Phone 8 device compared to a Sony Xperia Z. The images also show that Nokia’s currently unannounced device has virtually no bezel. Its previous handsets have not had massive bezels by any means, but they have been noticeable.

No details of its camera were published. However, reports have speculated that it may contain the same camera as the recently released Lumia 925. Details about the phone broke earlier this year when it was revealed Microsoft was working on an update to WP8 that would support 1080p devices. 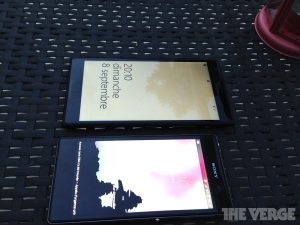 According to The Verge, the Lumia 1520 has a similar design to the Lumia 920/925 and the gallery of images also confirms a few specs: 6-inch display with a resolution of 1080 x 1920 display, Qualcomm Snapdragon 800 processor, 2GB RAM, 32GB of internal storage and run Windows Phone 8 GDR3 update (General Distribution 3). Apparently the Lumia 1520 will be announced in the coming weeks and we’ll keep you updated on an Indian release.